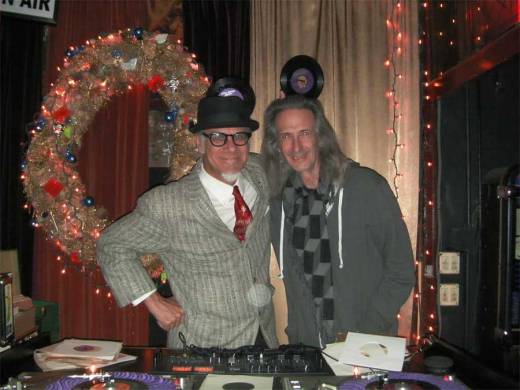 The DOO WOP HOP was held on Friday December 12 at Teddy’s Bar & Grill, during a DYNAGROOVE event, and it was most likely the best one yet. It featured the fabulous record playing of our pal Lenny Kaye. He and DOO WOP HOP host Phast Phreddie the Boogaloo Omnibus have known each other now for exactly 40 years, having met when Lenny was guitarist with the great Patti Smith and her (at that time) trio playing at the Whisky A’ Go-Go in Hollywood in November of 1974. They have kept in touch ever since and last week they had a few laughs spinning their best Doo Wop records for some very close friends and fans and the groovy Teddy’s clientele. Lenny still plays guitar for Patti Smith, and he and The Patti Smith Group are gearing up for some holiday shows, but Mr. Kaye found time to gather a box of old 45s and make the scene at Teddy’s. 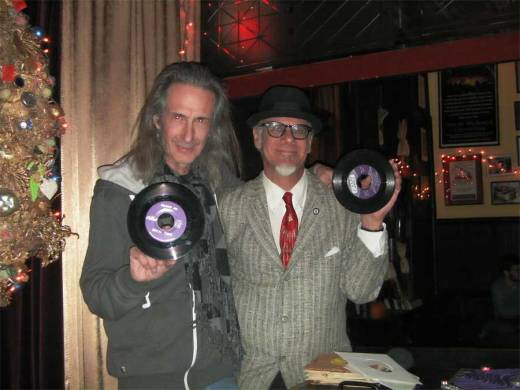 One of Lenny’s all time favorite songs is “I’ll Be Forever Loving You” by Jordan and the Fascinations. He played it, and also played a version of the song by a girl group, The Juliettes. The Boog played the original version by The El Dorados. Who can say which was the best, when the song is so good you couldn’t hurt it if you beat it with a stick (as our pal Doc Savage used to say all the time)! It is obvious that we will have to track down the versions by Lola Dee, The Marcels and The Bel-Aires. Are there other versions out there?

Oh, yes, it is December, so a few seasonal tunes were mixed into the fun. Santa done got hip, indeed!

All night long, fabulous group vocal after fabulous group vocal was played—then another! Is there any other music better than Doo Wop? The writers of the Boogaloo Bag think not. With any luck, the next DOO WOP HOP will take place sooner rather than later—the last one was more than two years ago.

In order to honor the great Doo Wop performers, Ruben Guevara’s wonderful Doo Wop-styled patriotic anthems were played at the beginning and at the end of the night. Here’s a list of all the songs played by Phast Phreddie the Boogaloo Omnibus, who even snuck in a couple vocal groups from Jamaica:

None of these records are for sale. Roll your curser over the song titles to dig some hot links to cool jams! 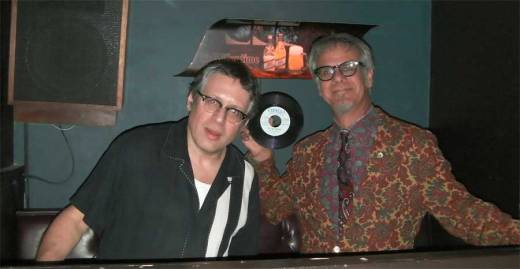 Dave the Spazz and Phast Phreddie the Boogaloo Omnibus swing at the Wang Dang Doodle! Photo by Nancy “Jeannie” Gardner.

On November 29, The WANG DANG DOODLE returned to the Commodore with the most excellent DJ work of Dave the Spazz and Phast Phreddie the Boogaloo Omnibus. Usually, the big, boss Commodore night of November is held on the day after Thanksgiving, but on this rare occasion, it was held on the Saturday after. It didn’t seem to matter, as both DJs dug deep into his respective bag of tricks and pulled out some fine food records to spin for the crowded room.

Dave the Spazz, of course, is the great WFMU DJ whose Thursday night show is the rage of the “in crowd” scene, and he digs all sorts of rockin’ stuff. See for yourself by streaming a recent broadcast HERE!!

Mr. Spazz played Huey Piano Smith records and The Boog played several Huey Piano Smith songs as performed by others. When these two DJs get together, you can always expect them to play monkey records. Toward the end of the evening, as the DJs go one-on-one, matching record-to-record, Mr. Spazz played Wanda Jackson’s fabulous “Funnel of Love” only for The Boog to counter with “The Time Funnel” by Jan Davis. It was another great night at the Commodore, with folks dancing violently, monkey videos showing on the TV screen and copious amounts of beer spilled on the floor!