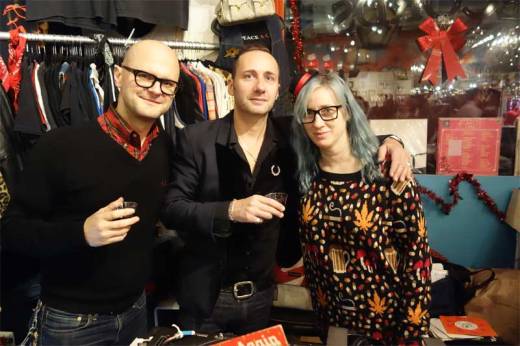 Our pal and fellow DJ Ol’ Stark is a cool Parisian moderniste who has been living in this city for more than ten years. He often hosts very groovy events—his Let’s Boogaloo was a huge favorite—and for the last several years he has been providing the soundtrack to the Arts & Fleas room of the Chelsea Market in Manhattan. Plus, Ol’ Stark has a booth of his own there, selling records and some very swingin’ threads. In December, he and the Arts & Fleas folks host a party called Sip & Shop: Ol’ Stark invites some of his DJ buddies to play records and the Arts & Fleas folks provide some champagne for anybody who wants it.

This year, the party was held on Thursday December 10th and included DJs Shakey, Kamala, Kurtis Powers, Camille, Domewrecka, Tru Tones and Phast Phreddie the Boogaloo Omnibus—each given about twenty minutes in which to bring joy to the world. This event is always a fun one because checking out the talented local artists’ goods while listening to good music is always a good time. The Boogaloo Bag writers were especially taken with the jewelry made with old typewriter keys

Phast Phreddie the Boogaloo Omnibus made the scene with a handful of his top Sixties Go-Go instrumentals, then closed with a seasonal treat. Here’s a list of all of it:

Captain Heartlock has got to be one of the busiest musicians in town. He’s in three bands: Madam Robot and the Lust Brigade, The Electric Mess and The Othermen. All of the bands are good, play often and make sound recordings. Plus, he is often seen around town DJing with his boss records. It was in the latter capacity for which he was employed at the Bootleg Bar on December 5 for WHAM-O WATUSI, hosted by Phast Phreddie the Boogaloo Omnibus. 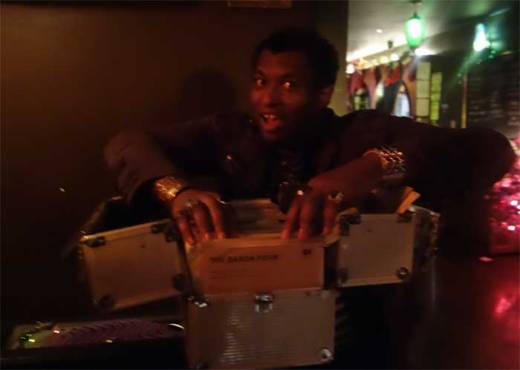 Captain Heartlock peruses through his box of 45s in order to select the perfect record to play at WHAM-O WATUSI!

The good Captain is often referred to as a “psychedelic fellow,” and indeed he played many records on this evening that fell into that category—even a few that were fairly recently recorded, yet had a groovy sound. At one point a group of young ladies asked Captain Heartlock to play some girl group records and he complied heartily.  He also played some great R&B and soul records. Phast Phreddie the Boogaloo Omnibus, on the other hand, stuck to the same old stuff he always plays—R&B, Go-Go, Garage Rock, Funk, Soul, Ska, and other jumpin’ jive. I guess you had to have been there…

This November, the Commodore Boogaloo Night fell on the day after Thanksgiving (the 27th)—as it does most years. When that happens, host Phast Phreddie the Boogaloo Omnibus brings out a host of food and bird records. He did it this year, when he presented the third TWIST ALL NIGHT, augmented in the most fabulous fashion with guest DJ Kid Congo Powers.

As the Boogaloo Bag reported when The Kid was guest DJ at WHAM-O WATUSI in August, he and The Boog go way back—most likely before most Boogaloo Bag readers were even born. The Kid has spent his entire adult life as a professional musician—playing guitar for (in roughly chronological order) The Creeping Ritual (which became The Gun Club), The Cramps, (then back to) The Gun Club, The Fur Bible, Nick Cave & the Bad Seeds, Congo Norvell, The Knoxville Girls and his current organization The Pink Monkey Birds. Man, that’s a lot of action with top legends. And to top it off, the band that he works with now is one of his best. The Boogaloo Bag writers recently caught his act in person and they will enthusiastically tell you that this is one great Rock’n’Roll teen combo! It is so great to see Kid Congo fronting his own band, writing whack songs and playing stun guitar! When this band comes to your town, by all means, go see it. Also, buy the records!

Meanwhile, back at TWIST ALL NIGHT, The Kid and The Boog spun boss records right up until 4:00 AM, when the Commodore bouncer insisted the music stop. This fellow is much too big for anyone to argue with, so the music ended… but not before these two fine DJs played a ton of great records. As noted, The Boog played a few food records and The Kid played some smokin’ instrumentals. Around about 3:00 AM they alternated the playing of records, which resulted in even more instrumentals being played—including the spinning of Travis Wammack’s “Scratchy” by The Kid followed by the Phast Man spinning “Scratch My Back” by B.J. & the Geminis. The Kid played the hot blues instrumental “The Freeze” by Fenton Robinson which The Boog followed with “Soul Express” by Lonnie Mack. The Kid also played his own answer to all the food songs when he set needle to “It’s a Gas!”

Phast Phreddie the Boogaloo Omnibus and Kid Congo Powers take special care to select the perfect records to play at TWIST ALL NIGHT!

The Boog also played a little tribute to two recently departed heroes: Allen Toussaint wrote “Candy Yam” for Lee Dorsey (fitting into the Thanksgiving theme); and “Swim Time U.S.A.” by The Life Guards was played in order to remember P.F. Sloan (and to salute our friend DJ Rata, a swim instructor by day, Boogaloo Enthusiast by night!).

Here’s a list of all the records played by Phast Phreddie the Boogaloo Omnibus at the third TWIST ALL NIGHT: