After two nights in a row of spinning boss soul, funk and organ groove recordings with Nogood Nick, Phast Phreddie the Boogaloo Omnibus was ready for the New York Night Train Sunday Soul Scream, hosted by Jonathan Toubin and featuring Reyes Rodriguez and Sheila B. This fabulous event was scheduled to take place in the early evening of Sunday June 5 at a club called Our Wicked Lady–on the rooftop, to be exact. This was going to be a fabulous night of dancing and swinging in the open air of industrial East Williamsburg with four boss DJs.

However, it rained. It rained pretty good, too, coming down pretty hard. So the event was moved indoors, into the dry confines of the actual club. The rooftop, of course, was a key draw for the event and, with the rain, attendance was low. But enough people showed up to make it fun and all the DJs played great records. As the early evening advanced, more and more people arrived for the festivities, turning the Sunday Soul Scream into a groovy happening. 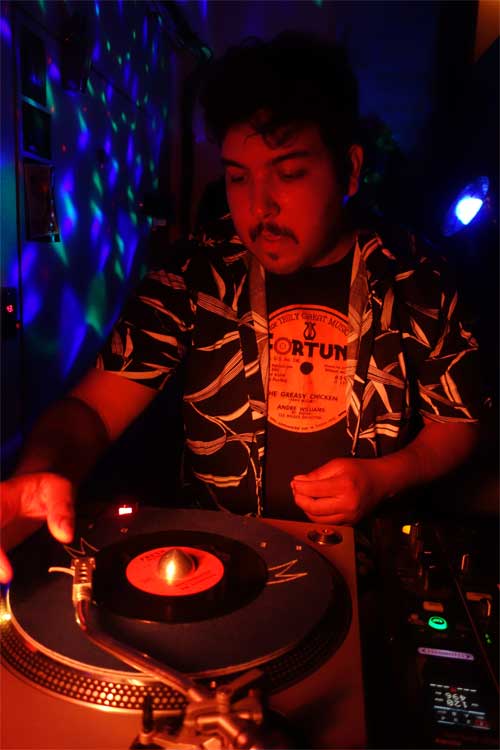 Reyes Rodriguez is a hep cat daddy from El Paso, Texas. He has a regular DJ night–the fourth Saturday of the month–at the Bootleg Bar. Also, he works for the good people at Norton Records and is often seen hanging around Rebel Rouser, the groovy record boutique in Bushwick everyone is talking about. At the Soul Scream, his choice of soul and greasy R&B records was impeccable.

Sheila B has become one of the most popular DJs on the scene since her return to New York City a couple of years ago. Her Friday afternoon show Sophisticated Boom Boom on radio station WFMU is listened to by thousands of people around the world (thanks to its live stream over the interwebs) and her monthly DJ night Sh’Boom is held on the third Friday of the month at this very same club, Our Wicked Lady. At the Soul Scream, Miss B started her set with Ernie K-Doe’s “Here Come the Girls,” than preceded to slay the place with a selection of sassy female soul singers.

Jonathan Toubin–well, what’s left to say about him? His New York Night Train series of events are always spectacular and he is one of the best DJs of reet music in town. At the Soul Scream he played some fabulous records–some of them coveted by The Boog–and in the middle of all that, he played Clarence Carter’s great record, “Slip Away.” Man, it was good to hear that one again. 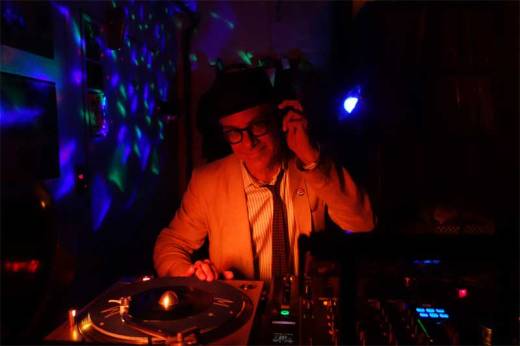 For this occasion, Phast Phreddie the Boogaloo Omnibus presented a program of some of his most favorite soul and R&B records. Indeed, only three of the records he played that night had never before been played at any of his DJ nights–and that’s because they are fairly recent acquisitions. Here’s a list of them all: 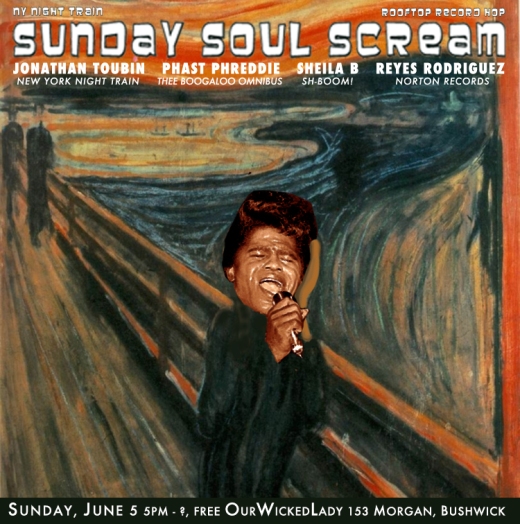 Day Two of the great DJ cultural exchange program took place on Saturday June 4 when Nogood Nick was guest DJ at WHAM-O WATUSI, hosted by Phast Phreddie the Boogaloo Omnibus at the Bootleg Bar in Bushwick, Brooklyn. The WHAM is a little more raucous than Rip! Rig! Panic!, which took place the night before. At the WHAM, the DJs play a lot of jumpin’ R&B, garage rock and rock’n’roll records. On this night, inspired by the presence of Nogood Nick, a fine soul music DJ, an extra helping of stomping soul records were played. Indeed, at one point, Mr. Nick turned to The Boog and declared, “I’m going into my Northern set here…” and he proceeded to play some slammin’ records. Man, you should have been there!!

Everyone who attended the two days of this DJ cultural exchange can attest that it was a great success and there were many requests for it to happen again. This will depend on quirks in calendars and schedules, of course, but who knows, perhaps it can happen again soon. 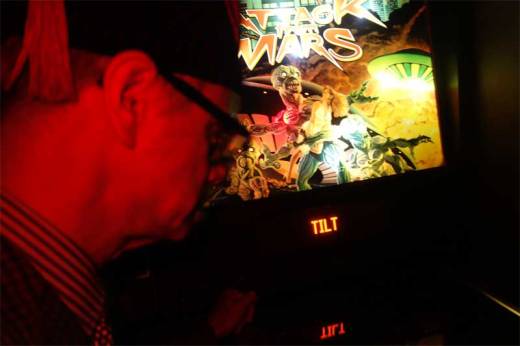 Meanwhile, chew on this–a list of all the records played by Phast Phreddie the Boogaloo Omnibus at WHAM-O WATUSI: 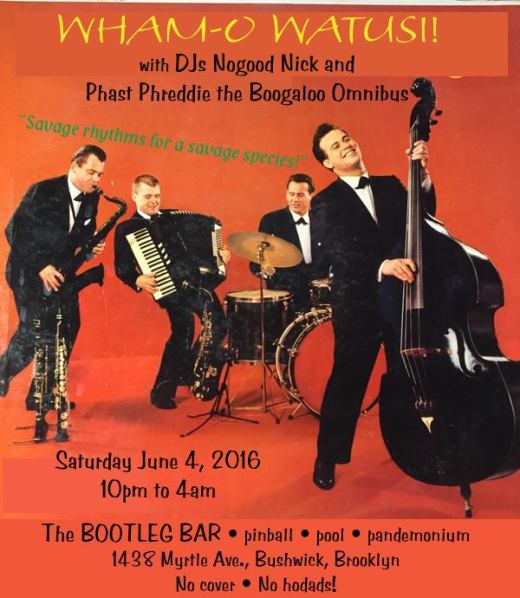 June third, fourth and fifth comprised the second wild weekend in a row for Phast Phreddie the Boogaloo Omnibus. The last Friday, Saturday and Sunday of May had The Boog swing HI-FI: IN FOCUS at the Commmodore with DJ Elevator Operator, Sofisticated Savages at Bar Below Rye with Drew Redmond and then there was The BIG TEN INCH at Hi-Fi.

The first weekend of June started out with Rip! Rig! Panic! at the Robert Bar with Nogood Nick on Friday June 3. It was the first of a two-day cultural exchange program that consisted of Phast Phreddie the Boogaloo Omnibus guesting at the Rip! with host Nogood Nick, and the next night Mr. Nick was guest at WHAM-O WATUSI with host Phast. This worked out great, as both DJs brought different records to play at each event, so no record was heard twice by anyone who may have attended each.

The weather was good and The Boog was able to ride his bicycle to the Robert Bar in Boerum Hill. When he got there, host Nogood Nick had the place swingin’. He was spinning the cool Mod jazz and organ groove records he digs. After a while, The Boog presented about an hour of the same. Then there was a set of funk records, followed by a bunch of soul records. It was a great night, and with any luck it shall be soon repeated. When it was over, The Boog packed up his 45s and scooted on down the road riding his crummy bike, slowing down only to observe the city lights reflecting on the smelly Gowanus Canal as he crossed at the Third Street Bridge.

Here’s a list of all the records played by Phast Phreddie the Boogaloo Omnibus at Rip! Rig! Panic!:

The BIG TEN INCH was held on Sunday May 29. It should have been held on May 22–the fourth Sunday of the month–but on most Sundays these days the Hi-Fi Bar is taken over by hockey players who go there to drink beer after their Sunday league games. They had no league game on May 29, due to the Memorial Day weekend, so The BIG TEN INCH was able to take place without being bothered by non-believers.

(The next BIG TEN INCH will take place on the 31 because there is no league game that day also.)

In spite of the three day weekend–maybe because of it–there was a good turnout of folks with 78s in hand: Jukebox Jonny, Red Wing Mark, Alex De Laszlo, Adam Lore, Rich Sibelo and first timers Justin CollectorScum and John Clemente. As always, The BIG TEN INCH was hosted by Phast Phreddie the Boogaloo Omnibus. Plus, there was pizza–from our favorite pizza joint: Stromboli’s! And if that weren’t enough, official Boogaloo Bag photographer Nancy “Jeannie” Gardner made cookies: chocolate crinkles!!! Man, those were good!!!! We understand that she will make something even more special for the next BIG TEN INCH. Watch this space for details. 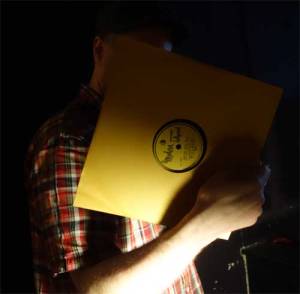 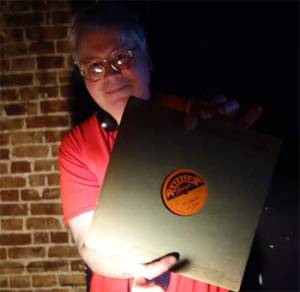 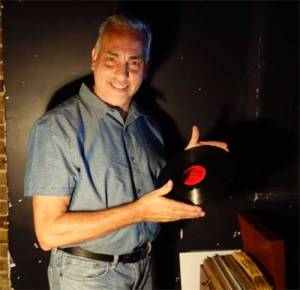 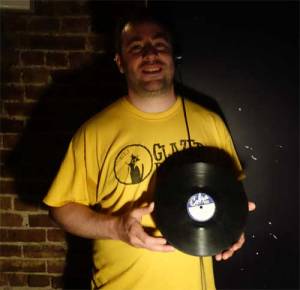 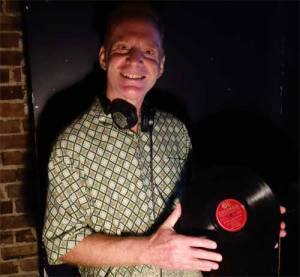 Here’s a list of all the 78s played by Phast Phreddie the Boogaloo Omnibus:

Here’s a gallery of some of the 78s that were played. Click on them and they will electronically big-o-fi…

Sofisticated Savage is a Drew Redmond concoction: he and a guest DJ swing with fuzz-toned garage and up-beat R&B records all night at the Bar Below Rye in Downtown Williamsburg, Brooklyn. On Saturday June 28, Phast Phreddie the Boogaloo Omnibus got the call to swing… and swing they did. These two DJs had the place jumpin’. At one point, about 80% of the attendees were boppin’ out on the floor!

Spinning records with Mr. Redmond is always a gas. He’s got some good ones, and one can’t help but come away with additions to the old “want list” after a night diggin’ his selections. Plus, he is the kind of person who can keep up his end of the conversation when discussing the joys of collecting records on the Legrand label.

The Bar Below Rye is an elegant and cozy joint with a nice DJ booth and excellent sound system. It is located, as one may guess, under a restaurant called Rye on South First Street. The restaurant has an excellent menu and the Boogaloo Omnibus was able to take advantage of it when he ordered a desert item: warm chocolate cake with pistachio ice cream. Delicious! Going back for more soon! 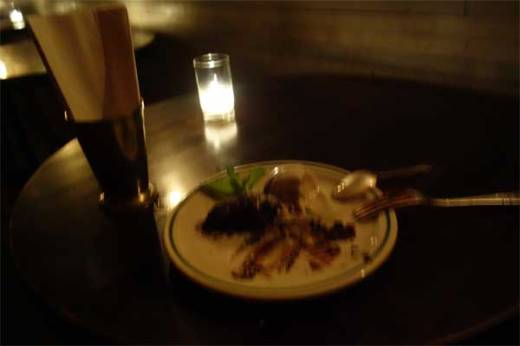 Warm chocolate cake with pistachio ice cream… or what’s left of it!!

Here is a list of all the records played by Phast Phreddie the Boogaloo Omnibus at Sofisticated Savage: