Phast Phreddie the Boogaloo Omnibus and Mr. Gaylord Fields are all thumbs at the DYNAGROOVE!

The second Friday of the month has become very popular at Teddy’s Bar & Grill, with diners coming from around the city—Long island and New Jersey, even—to chow on the great food and dig the great audio atmosphere as presented by the DYNAGROOVE. Friday April 11 was no exception, as host DJ Phast Phreddie the Boogaloo Omnibus was joined by the great WFMU DJ Gaylord Fields in a program of cool jazz, charming cha-chas, provocative pop and enticing exotic rhythms.

Mr. Fields is always a perfect guest DJ for the DYNAGROOVE. If you ever listen to his show on early Sunday evenings, you would know that his eclectic enthusiasm for magnificent melodies naturally corresponds with the dynamic of the DYNAGROOVE: groovy music! Mr. Fields is a guest at the DYNAGROOVE several times a year, so make sure you catch his scene the next time he swings.

In the meantime, feast your eyes, and in a few cases your ears, on a long list of records played by Phast Phreddie the Boogaloo Omnibus:

Our friends Pixie 007 and Sophie Thunder recently began a groovy new DJ night called Bubble & Squeak in the bar of the Hotel Chantelle in the Lower East Side. According to official promo, “Hotel Chantelle provides a relaxed and sophisticated atmosphere…” On Sunday April 6, the sophistication bar was lowered considerably when Phast Phreddie the Boogaloo Omnibus initiated Bubble & Squeak by being its first guest DJ! Resident DJ for this event (perhaps for the Hotel Chantelle, too) is Jeremy Bastard, who played some cool stuff using the latest in laptop technology.

Phast Phreddie the Boogaloo Omnibus deftly uses the laptop to hold his record sleeves as he DJs at Bubble & Squeak.

The Boog mixed in various R&B and soul tracks with non-standard British Invasion fare in order to achieve a mood that was not only unrelaxing (indeed, many attendees were dancing) but also decidedly unsophisticated! In spite of this, the powers that be at Hotel Chantelle decided that the event was a great success and it shall continue weekly, with next Sunday’s guest DJ being the great Josh Styles—a fellow who knows a thing or two about Moderniste music.

The Boog swings at Bubble & Squeak! Photo by Nancy Gardner. 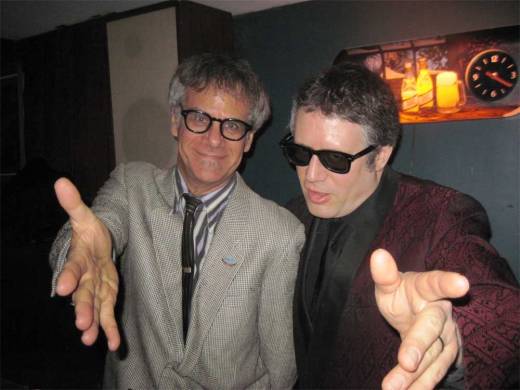 Phast Phreddie the Boogaloo Omnibus and Dave the Spazz swing at the WANG DANG DOODLE! (click on the photo and it big-o-fies!)

The WANG DANG DOODLE is one of the longest running (although irregularly so) DJ nights in town hosted by Phast Phreddie the Boogaloo Omnibus. It was instituted in 2002 (or was it 2003, who remembers?) at Rififi with the great WFMU DJs Rex Doane and Dave the Spazz. The Wang thrived for a while at the Trophy Bar, attempted a comeback at both The Royale (now defunct) and at Teddy’s Bar & Grill (where it developed into the DYNAGROOVE). The WANG now resides as a semi regular event at The Commodore with key co-DJ Dave the Spazz still working the room.

And “Reet” it was on Friday March 28, when The Spazz and The Boog took to the turntables at The Comm and delivered five full hours of fabulously frantic phonographic fun for the full dance floor of frugin’ folks! Dave the Spazz brought his A-list monkey and Popeye records. The Boog brought Little Richard cover songs and Howlin’ Wolf records. All night long, sweaty young people were commenting on the groovy grooves being laid down by the DJs. Dear readers, it must be said that when The Spazz and The Boog are in the same room working the turntables, YOU WANT TO BE THERE!!! Don’t you dare miss the next WANG DANG DOODLE when this will happen, scheduled for July 25 at The Commodore. Mark it in your calendar and make an extra special effort to make that scene!!

Here are the records played by The Boog (some of them have links so you can listen and recreate The WANG in your mind):

None of these records are for sale!