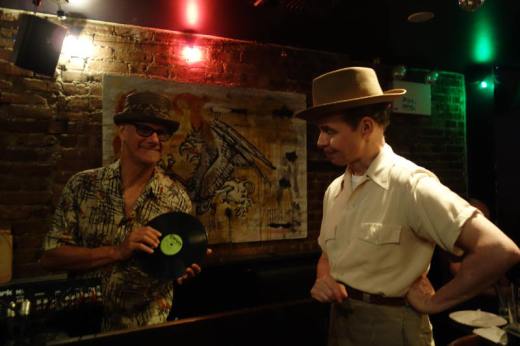 Phast Phreddie the Boogaloo Omnibus and Michael McMahon discuss the significance of a Piano Red record.

On a hot night in late September, the BIG TEN INCH took place in the cool and friendly confines of the Hi-Fi Bar in the East Village. Although there were plenty of friends and folks on hand to dig the wack shellac, only a few brought actual 78s to play. This gave those who brought ’em plenty of time to play ’em. Host Phast Phreddie the Boogaloo Omnibus got to play just about everything in his box, including the Mr. Goon-Bones record.

Andy the Upsetter swings with Mambo 78s at the BIG TEN INCH!

Andy the Upsetter usually brings mix of genres: mento, jazz, R&B and calypso. This time he brought a ton of mambo records and played nearly every one of them–it was cha-cha city at the Hi-Fi most of the night. We think he may have even turned a couple over when he was starting to run out of records to play.

New comer DJ Becky G brought one 78–but it was a good one! A Jimmy Lunceford on Bluebird with “Jazznocracy” on one side and the legendary “White Heat” on the other. It swung like crazy.  The Upsetter was selling some mambo 78s and Becky G bought a few of them, so we expect her to spin more Cuban rhythms at the next BIG TEN INCH. 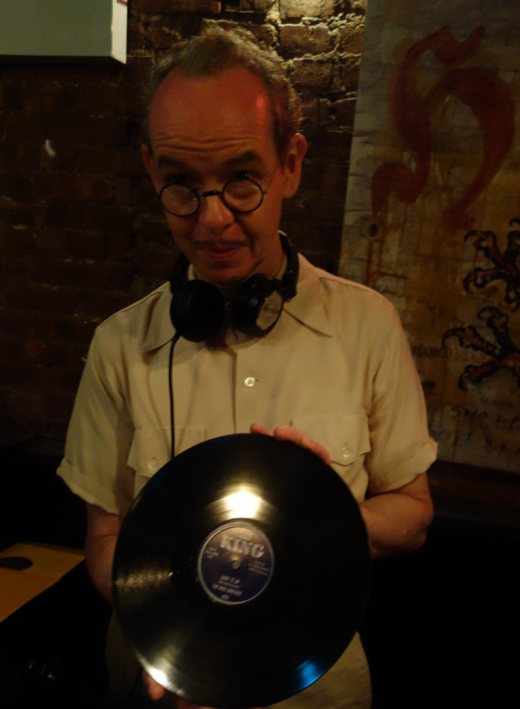 Toward the end of the evening, as both The Upsetter and The Boog were running out of records, Michael McMahon showed up with his box of hillbilly records and saved the day. That was perfect timing on his part. The club turned immediately from claves and bongos to red-neck yodeling!!! There may have been several at the Hi-Fi that were not prepared for such a sharp turn of audio ambience; but all had a great time. 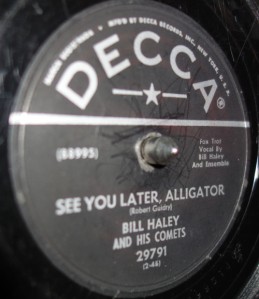 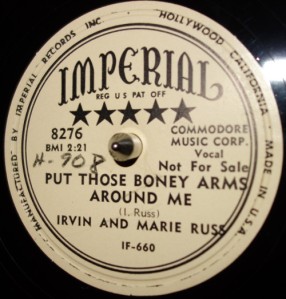 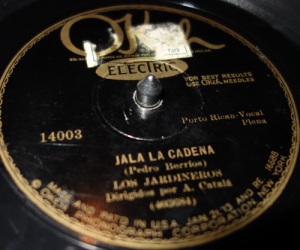 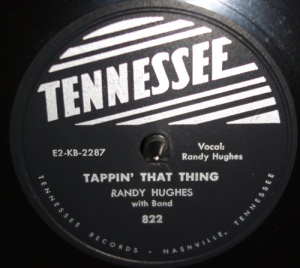 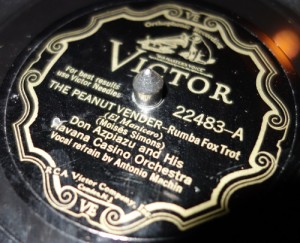 Our pals Ted Barron and Juke Joint Jonny were on hand, but alas, they brought no records and were only present to dig the scene–and partake in pizza and the delicious cinnamon-infused brownies baked by Boogaloo Bag photographer Nancy “Jeannie” Gardner. She even made some glucose-free brownies for Mr. McMahon, who must eat such things to stay healthy. Thank you Miss Nancy. 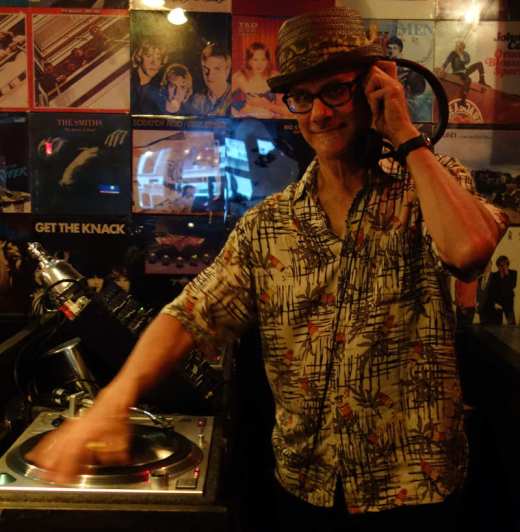 Here’s a list of all the 78s played by Phast Phreddie the Boogaloo Omnibus at the September BIG TEN INCH 78 RPM Listening Party:

None of these records are for sale. Some of them have links to youtubes clips. Dig it!

The Unrehearsed swing with Christina Caira at the Copycat Cover Song Night Tribute to Nuggets IV!

Phast Phreddie the Boogaloo Omnibus is the go-to DJ when it comes to the Copycat Cover Song Night annual tribute to the great Nuggets compilation of boss garage rock records. On September 13, he worked his fourth one–of four Nuggets tributes! That’s fine with the Phastman, as he digs the Nuggets album the most, as he digs swingin’ at any Copycat Cover Song Night, hosted by our pal DJ Xerox at Otto’s Shrunken Head on the second and fourth Wednesdays of the month.

Nuggets, of course, is the coolest two-record set of twitchen Sixties garage rock, compiled by Lenny Kaye. Issued in 1972, it has since become legendary and influential. Mr. Kaye himself appeared as a guest DJ at the first two Copycat tributes. Unfortunately, he was unable to attend this one, however his spiritual presence was definitely felt.

And what bands: The Unrehearsed, The Flying Insects and The Serpentones all played.

The Unrehearsed in action at the Copycat Cover Song Night Tribute to Nuggets IV!

The Unrehearsed is comprised of some local Sixties music aficionados who happen to be excellent musicians. They never rehearse, but they know this music so well that they can just get up and play it. Their repertoire consisted of all sorts of Sixties garage rock nuggets, which they played with authority. The Boogaloo Bag writers were especially wowed when the group played “Fight Fire,” the excellent Golliwogs song (not on the original Nuggets, but included in the incredible four-disc Nuggets box set; a sort of tribute to the original, right?). Our pal Christina Caira (of Quitty & the Don’ts) sang lead on “Stop Get a Ticket” and banged tambourine on another song. 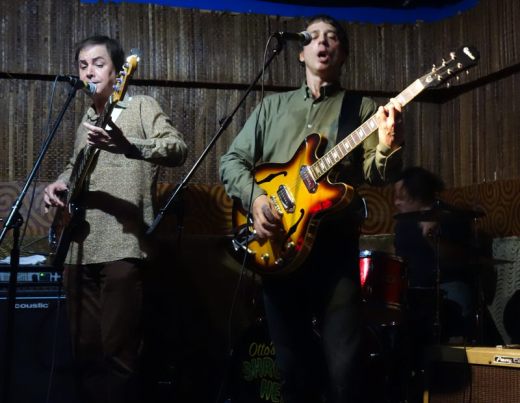 The Flying Insects swing with a decidedly British Beat at the Copycat Cover Song Night Tribute to Nuggets IV!

Nuggets II is a four-CD compilation of mostly British recordings from the same era–1964 to 1969. Like its predecessor, it is packed full of the sounds of flash and pow! These days the kids call it Freakbeat. We can dig that. Apparently, so can The Flying Insects, who performed songs from that box set. Stand out song was The Smoke’s “My Friend Jack.”

The Serpentones swing at the Copycat Cover Song Night Tribute to Nuggets IV!

The Serpentones opened their set with “Sweet Young Thing” by The Chocolate Watch Band–one of the all time favorite songs here at the Boogaloo Bag. The band proceeded to play mostly original songs, occasionally spicing things up with a track or two from Nuggets, as per the event demanded. The Serpentones were a bit unusual for a modern rock band, as it incorporates a tenor saxophone into its sound. But it was cool and those in attendance seemed to dig it. 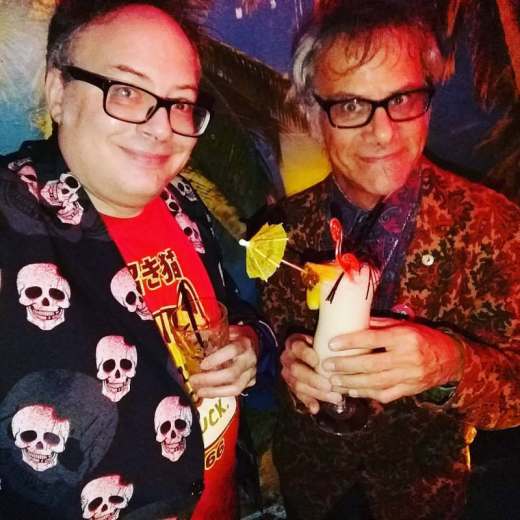 For his part, Phast Phreddie the Boogaloo Omnibus played all cover songs; songs from the era performed by other acts from the era. The only exception was the record by The Searchers, which is the first version of “Sugar and Spice,” which was performed by The Cryan Shames on the original edition of Nuggets. After the bands played and DJ Xerox was able to get the bands sorted and his records delivered to the DJ booth, the Phastman handed it over to the host, who always plays the most unexpected cover versions of songs imaginable.

Here is a list of all the records played by Phast Phreddie the Boogaloo Omnibus at the Fourth Annual Copycat Cover Song Night Tribute to Nuggets:

None of these records are for sale. Some have links to the youtubes for your personal listening pleasure!

The WHAM-O WATUSI takes great pride in featuring DJs and/or records from all over the world. So far, this year alone, The WHAM has had DJs from Mexico, El Salvador, Canada, Venezuela, the Netherlands and even Cleveland; host Phast Phreddie the Boogaloo Omnibus often spins records from such far away places as France and Japan; plus there was a guy who played some rockin’ jams from Thailand! Truly, it is an international affair.

On Saturday September 2, two more DJs were flown in from Mexico City to DJ at the Bootleg Bar in Bushwick for the WHAM-O WATUSI: Carlos René and Elisse Locomotion. They host a fabulous DJ night called Hipshakers and they own a cool record store called Dedos Susios. They were recommended by our pal DJ Rata and they did not disappoint. All night long, these two master disc selectors played some of the bossest records the Boogaloo Bag writers have ever heard; many of them from way south of the border that nobody in this city will ever hear again! They had just come from Montreal, where Señora Locomotion picked up some very cool French Canadian records and proceeded to spin them. Señor René has spent time in Peru and Colombia and he played some incredible records from there.

Unfortunately, the Boogaloo Bag writers finked-out by leaving the official Boogaloo Bag camera at home, thus there are so few good photos of the night available. The one shown above was taken by our pal Reyes Rodriguez (whose own Border Beat night happens on the fourth Saturday of the month at the Bootleg Bar) who showed up to swing for a while. Also in attendance was the lovely Lilly Martini, who is moving back to Spain in a couple of days. Sorry to see her go, as it was always a delight to see her dancing at the Boot. Although the rain fell pretty hard all night, there were still plenty of people in the Bootleg Bar to make it fun. Plus, Nancy “Jeannie” Gardner baked some cinnamon-infused fudge. Man, that was good. With the rain keeping attendance down somewhat, there were plenty for everybody who was there! Yummy!!

Here’s a list of all the records played by Phast Phreddie the Boogaloo Omnibus at the WHAM-O WATUSI:

None of these records are for sale. Some of them have links to youtube clips. Dig it!!