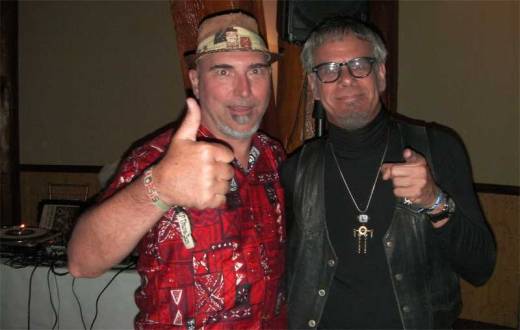 How many times must it be said: Tiki Oasis is the most fabulous event of its kind known to man. Four nights and three days of folks dressed in loud, wildly-colored flower shirts and skirts, sipping rum drinks, diggin’ groovy, mid-century tiki culture, boss music and each other. Hosted by our pals Otto and Baby Doe Von Stroheim, it is held every August at the Crowne Plaza Hotel in San Diego. Tiki Oasis is the biggest tiki show on earth. This year it was held on August 14, 15, 16 and 17 and it featured such great musical acts as Davie Allan & the Arrows; The Satin Chaps (from Portland, OR), who also backed the legendary bongo player Preston Epps; The El Vez Revue; The Martini Kings; The Standells and Love Revisted with Johnny Echols; among many others.

With the beatnik theme this year—officially Beat Tiki—Phast Phreddie’s poetry-with-a-beat group of the late eighties Phast ‘n’ Bulbous was asked to reform and perform. Phast has been to Tiki Oasis several times and often DJ’s, too—and it is always a gas. However, since he was scheduled to perform with Phast ‘n’ Bulbous, thus having to schlep his semi-trusty, getting’ rusty C-melody saxophone all the way to San Diego, he really didn’t want to have to lug around a box of old 45s, too. So he initially balked when Otto asked him to DJ the party at the Bali Hai Restaurant—a swingin’ tiki-themed eatery on Shelter Island in San Diego—on the first night of Tiki Oasis. Otto was insistent, though and suggested that he bring some of his own records for the Phastman to DJ with. Well, who can refuse that—certainly not Phast Phreddie!

As it turned out, His Phastness was able to tote a box of about 55 45s with him on the plane. Good thing, too. Whereas the indoor party is often a chill-out zone (while hot surf music is played on the nearby outdoor stage), this time many tiki enthusiasts felt uppity and wanted to dance. The records that Otto packed contained mostly beatnik records, jazz, exotica—some great things and some of them got played early in the set. But once the freaky tiki folk signaled they wanted a hotter beat, The Boog was able to provide it.

The beatnik theme necessitated the inclusion of like-themed records, and records containing bongos; also, jazz records: bebop, modern and mod. It is largely the latter style that got the excitable tiki folk dancing and carrying on. Among Otto’s records that the Phastman played were those by Herbie Mann, Les Baxter, Dave Brubeck and a few others that have been lost in the brain freeze caused by a virgin peña colada. One of the highlights of the evening was a gang of folk in a rumba line, kickin’ it up to “La Burbuja” by Leticia Estrada, a cumbia-flavored version of the theme to “The Blob!”

Around 11:30, an event manager informed Phast Phreddie that the party would end in ten minutes. He was down to his last couple of records, and, indeed, pulled out the Benny Poole record to play again! Everything worked out!

Here is a list of the records (the ones that he brought) played by Phast Phreddie the Boogaloo Omnibus at the Lanai Bar in the Bali Hai on the opening night of Tiki Oasis 2014:

More photos of Beat Tiki fun…click on them and they will magically Big-O-Fi!

Davie Allan and the Arrows rock at Tiki Oasis!

Preston Epps discusses his life as a bongo player with Duke Weiss at Tiki Oasis!

The Little Richards played a room party that was too packed to get a good photo of them!

Tony from The Martini Kings and Paul from Phast ‘n’ Bulbous supply bop for King Kukulele at Tiki Oasis!

The Boog visits DJ Howie Pyro as he swings poolside at Tiki Oasis!