The BIG TEN INCH is back in a major way! On December 27, 2015, this fabulous 78 RPM listening party blew into Club Hi-Fi in the East Village of Manhattan for five—NO! actually nearly SIX—hours of shellac power!! Along with host Phast Phreddie the Boogaloo Omnibus, nine people brought 78s to play, and many more came to dig the scene. Among the participants were Adam Lore (50 Miles of Elbow Room), Alex De Laszlo (King Missile), Bob Palmeroy, DJ Rata (Mambo Jambo), Michael McMahon (Susquehanna Industrial Tool and Die Co.), Rich Sibello (WFDU), Ted Barron (WFMU’s Give the Drummer Some Radio), and newcomers Josh Styles (Smashed! Blocked!, Daddy Long Legs) and Dominick Costanzo. The action was so heavy that many attendees stayed until nearly 10:00 PM and the shellac was spun up until then.

Everybody brought great records. Many styles of music were played. Rata played some cool mambos and Michael Mac swung the hillbilly scene. Teddy B played Elvis! Adam Lore played “Shrimp and Gumbo”—the greatest record every made!! (The BOOGALOO BAG writers were very envious of this selection and have made a note to obtain a copy on 78.) Swing, gospel, blues, jump blues, rock’n’roll, R&B, doo Wop, jazz, rockabilly and many other hot sounds were aired—all on 78 RPM. 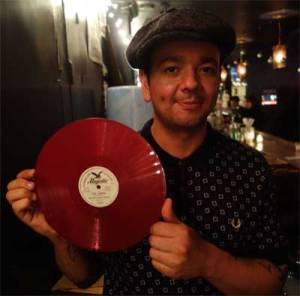 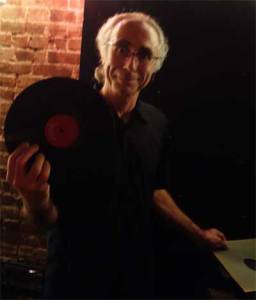 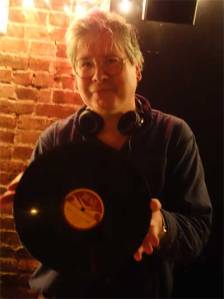 BOOGALOO BAG readers should note that, now that The BIG TEN INCH has found a new home, it will take place on the fourth Sunday of every other month, starting on January 24. The Hi-Fi Bar is conveniently located on Avenue A and East 11th Street and owner Mike Stuto has been very accommodating to The BIG TEN INCH Faithful, even providing pizza! BIG TEN INCH swings from 5:00 PM to 9:00 PM, the first two and a half hours take place during happy hour. We will see you next month.

Here’s a list of all the 78s played by Phast Phreddie the Boogaloo Omnibus at The BIG TEN INCH (Johnny Otis 78 was played in honor of his birthday the next day):

None of these 78s are for sale!

The greatest record ever made!