June third, fourth and fifth comprised the second wild weekend in a row for Phast Phreddie the Boogaloo Omnibus. The last Friday, Saturday and Sunday of May had The Boog swing HI-FI: IN FOCUS at the Commmodore with DJ Elevator Operator, Sofisticated Savages at Bar Below Rye with Drew Redmond and then there was The BIG TEN INCH at Hi-Fi.

The first weekend of June started out with Rip! Rig! Panic! at the Robert Bar with Nogood Nick on Friday June 3. It was the first of a two-day cultural exchange program that consisted of Phast Phreddie the Boogaloo Omnibus guesting at the Rip! with host Nogood Nick, and the next night Mr. Nick was guest at WHAM-O WATUSI with host Phast. This worked out great, as both DJs brought different records to play at each event, so no record was heard twice by anyone who may have attended each. 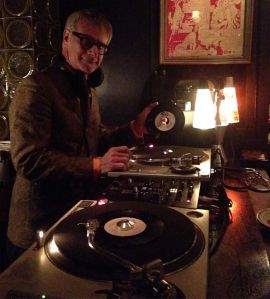 The weather was good and The Boog was able to ride his bicycle to the Robert Bar in Boerum Hill. When he got there, host Nogood Nick had the place swingin’. He was spinning the cool Mod jazz and organ groove records he digs. After a while, The Boog presented about an hour of the same. Then there was a set of funk records, followed by a bunch of soul records. It was a great night, and with any luck it shall be soon repeated. When it was over, The Boog packed up his 45s and scooted on down the road riding his crummy bike, slowing down only to observe the city lights reflecting on the smelly Gowanus Canal as he crossed at the Third Street Bridge.

Here’s a list of all the records played by Phast Phreddie the Boogaloo Omnibus at Rip! Rig! Panic!: