How often do we have to say it: Rebel Night is BOSS and we dig it! Hosted by a host of crazy Japanese kids–Seiji, Hiromo and Junichi—Rebel Night features some of the rockin’est rock’n’roll music you will ever hear: loud, pure, simple, perfect for dancing and with a heavy emphasis on the rockabilly. On Friday June 23, Phast Phreddie the Boogaloo Omnibus was asked to guest DJ at its first event at a new location: Diviera Drive. At one time, the location was a gas station/auto repair shop, but it had been closed for a very long time and about a year ago some folks turned it into a swingin’ Italian restaurant where, on weekend evenings, they pull out the tables and chairs and let folks swing. Thus was the room when the Rebel Night took place.

Hiromu Yanagiya is at the controls at Rebel Night!

Our good friend DJ Jumpy was also on the scene and along for the ride. Each DJ was allotted 30 minutes, as per an hourglass (or half-hourglass, as the case may be) that was employed to keep each disc-spinner honest.

Hiromo commenced the evening with fine set of rockin’ tunes. Then The Boog was up and he kept the house hoppin’. Seiji continued with the rockin’ sounds. I don’t know how he does it, but at every Rebel Night, Seiji proves himself to be one of the finest rock’n’roll DJs around. Next up was DJ Jumpy, who benefitted from the breakdown of the hourglass–he had been at the turntables for well over 45 minutes before anyone realized that the sand in the hourglass was stuck! That’s OK, though, because his set had to be one of Jumpy’s best the Boogaloo Bag writers had ever witnessed. Folks were dancing the entire time. 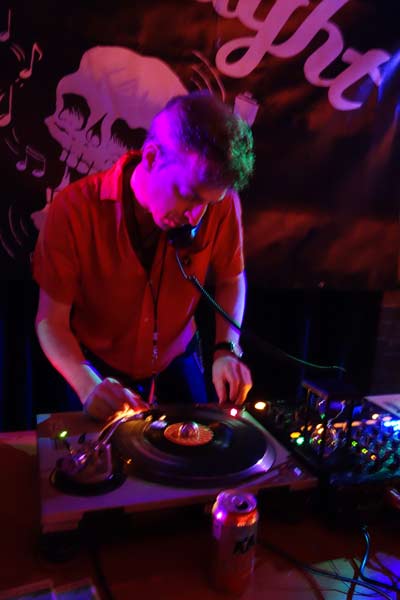 The official Rebel Night hourglass was fixed and Junichi–another guy with great records–took his turn at the DJ booth. Lead-off batter Hiromo followed with an even better set than his earlier one. During The Boog’s second set, he was praying that the hourglass would jam up again; he was having such a gas playing records for the dancers that he didn’t want to quit. Seiji, on the other hand, took full advantage of the generous amount of drink tickets dispensed by the club, and when it was his second turn, he declined, lest he ruin one of his rare records. Judging by his second set, Jumpy must have also taken advantage of his allotted drink tickets; nearly every one of his offerings was mis-cued!!! Yeowzah!! (Though it should be noted that the PFL system was less than optimal.)

Junichi finished off the night with another fine set of rockabilly madness. The night ended way too soon. Folks were still dancing when the club announced it was time to go home. WHAAAHHHH!!! But what a night was had and anyone who would like to re-live it can always refer to this here Boogaloo Bag.

Phast Phreddie the Boogaloo Omnibus greases his hair back for Rebel Night!

Phast Phreddie the Boogaloo Omnibus swung with Fifties and Sixties hits and hot ones. He got a request to play a couple soul records, so he played the rockin’est soul records he had in his box! It’s always a pleasure to play for the people when the people are twistin’ to the beat. Dig it all the records he played at Rebel Night here:

Every song has a link to the youtubes. Dig it!! None of these records are for sale.