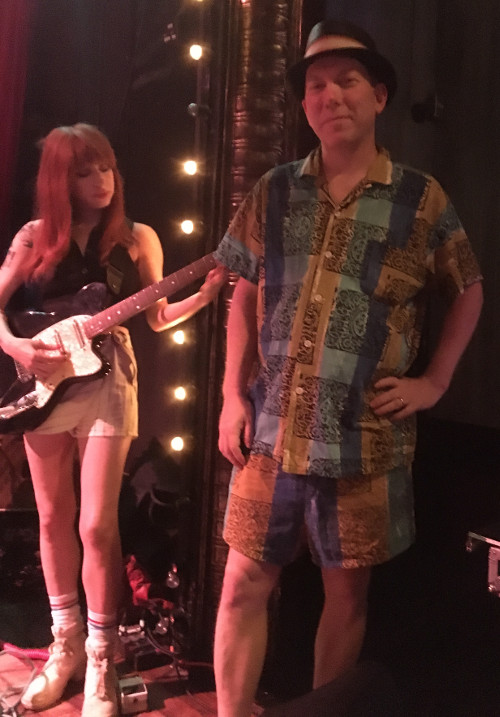 Todd-O-Phonic Todd prepares to introduce PMS & the Mood Swings with Leah Lugosi at the Union Pool.

Todd-O-Phonic Todd is one of the hardest working men in show business. He has been a presenter of fabulous Rock’n’Roll events seemingly before any of us were born. For many years he made Maxwell’s of Hoboken the swingin’est place in New Jersey. He was responsible for such super boss reissue LPs as Shakin’ Fit, What a Way to Die, Bug Out, Bo Did It and Wail on the Beach. His Telstar Records put out important platters by The Mummies, The Pussywillows, The Swingin’ Neckbreakers, The Fleshtones and The Woggles. Over the last several years, he has had his own show on Saturday afternoons from 3 to 6 on radio station WFMU. If you dig hot Rock’n’Roll records, it’s the show for you.

On August 4, Todd-O-Phonic Todd, also known as the Boss Groover, was slated to swing his boss records at the WHAM-O WATUSI at the Bootleg Bar. He also had a show he was running earlier that afternoon at Union Pool, part of its Summer Thunder series. The show featured some very fabulous talent: Miriam and Nobody’s Babies, The Jay Vons and PMS & the Mood Swings. Plus, it was being broadcast in the Boss Groover’s radio show’s time slot–though he was not actually hosting his show. In his stead was Amanda Nazario. She has a couple of shows on WFMU, too, one of which is on the “Give the Drummer Some” interweb stream, and she fills-in from time to time. Mr. O’Phonic was running around making sure the bands got on stage on time and eating tacos.

Speaking of tacos, as Phast Phreddie the Boogaloo Omnibus entered the building, he was accosted by Matt Fiveash, another WFMU DJ (his blues show on Tuesday nights is super) and the bass player in Miriam’s Nobody’s Babies. He saw The Boog and insisted that he have a couple of chits to get free tacos. Said the band had way more than they needed and who wanted them to go to waste? At the Union Pool–a place that, before gentrification came to Williamsburg, was actually a place that sold swimming pool supplies and equipment–there is a big yard in which is parked a taco truck vending tacos. Good tacos! Who can resist? Thank you Mr. Fiveash.

The bands were originally supposed to play in the yard, but a late morning thunder storm necessitated a change of scene. The bands played in the Union Pool’s concert hall. Inside the hall, Ms. Nazario was playing records and making announcements for the folks listening to the broadcast at home. Around 3:15pm or so, Miriam and Nobody’s Babies took the stage. Miriam Linna does it all: record company mogul for Norton Records, book publisher for Kicks Books, drummer, local personality, and now fronting her own band. Plus, she’s on a one-woman crusade to wangle The Kinks into getting back together! At the Union Pool the band rocked. Then The Jay Vons played; one of our favorite local bands. Closing the show was PMS & the Mood Swings (which featured our friend Leah Lugosi who guest DJed at the WHAM-O WATUSI a while back). Each band was unique, did its own thing, and was boss! 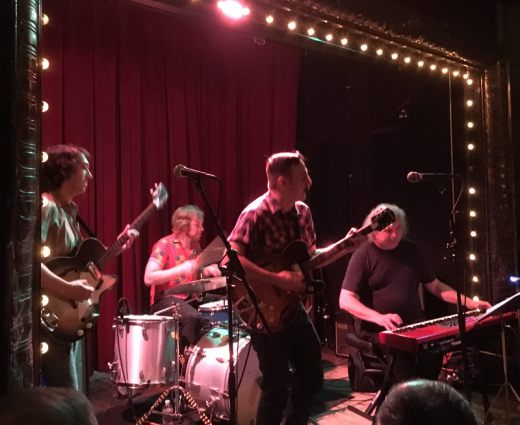 The Boog headed home, unlaxed for a while, had a little grub, then grabbed his box of rekkids to go back out to the wilds of Bushwick in order to swing at the WHAM. He arrived at the Bootleg Bar just before 10:00PM, set up everything and was soon playing his records. Guest DJ Todd-O-Phonic Todd arrived shortly thereafter. As one would expect out of a man with such impeccable taste, he played some fabulous records. Our friends Peanutbutter Brown, Matt Clarke and Alex DeLaszlo showed up to groove to the Boss Groover’s jams. 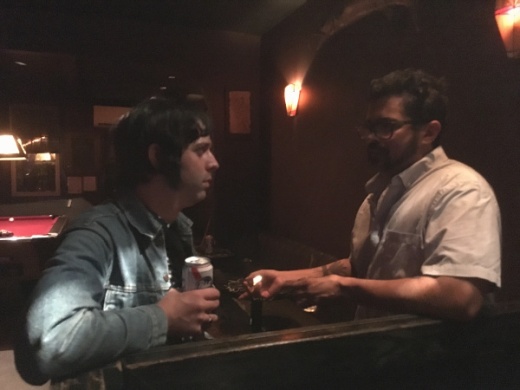 Matt Clarke and Peanutbutter Brown discuss the fabulousness of the records Todd-O-Phonic Todd was playing at the WHAM-O WATUSI!

Folks, the Boogaloo Bag writers cannot emphasize enough what a cool radio show Todd-O-Phonic Todd has. Every Saturday afternoon from 3:00 to 6:00 (unless he’s vacating in Wildwood, NJ with his lovely wife Siss-O-Phonic Cheryl) the Boss Groover swings with some extremely hip sounds. He plays all kinds of Rock’n’Roll records, just the good stuff, from every era; he has had some cool interviews with folks such as Graham Gouldman, Kid Congo, Chris Stamey, Eric Carmen and David Aguilar; and live bands like The Posies, Yo La Tengo, Los Vigilantes, The Whips, The Muffs and Daddy Long Legs. This is mandatory listening for all Boogaloo Bag readers!

Todd-O-Phonic Todd re-sleaves another boss jam at the WHAM-O WATUSI!

For this occasion, Miss Nancy made some most excellent cinnamon cookies to complement the vegan brownies she likes to make. Always snacks and finger-snappin’ music at every WHAM-O WATUSI! A very tired Todd-O-Phonic Todd left the scene a bit early–who could blame him after all that action he provides, plus he had two rivers to cross to get home to Jersey City–so the Boogaloo Omnibus was able to play a few more songs than usual.

Here’s a list of all the records played by Phast Phreddie the Boogaloo Omnibus at the August WHAM-O WATUSI:

None of these records are for sale. Some of them have links to the youtubes, so you can dig ‘em yerselves! 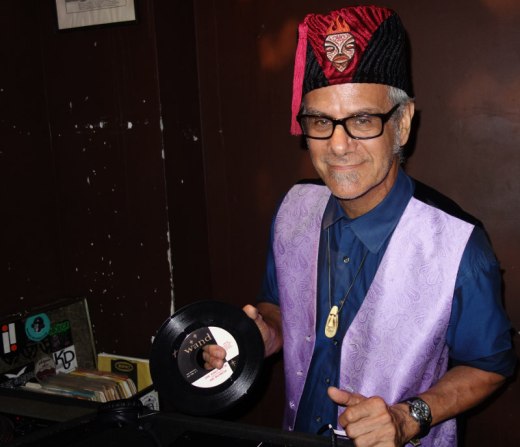 Phast Phreddie the Boogaloo Omnibus swings at the WHAM-O WATUSI! 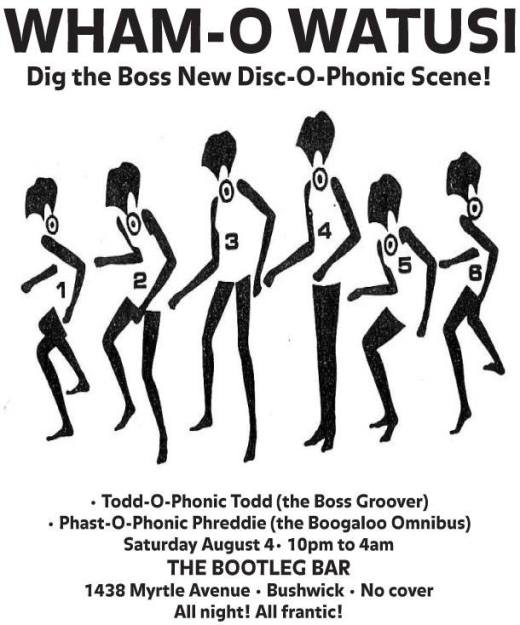