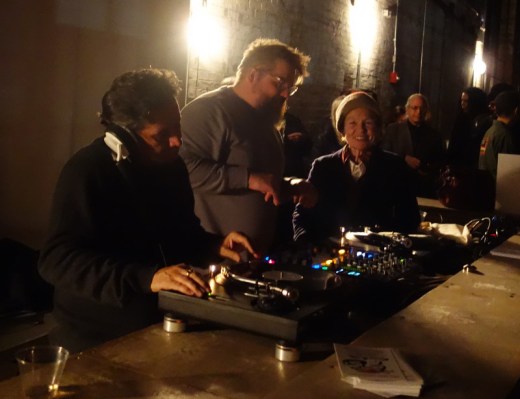 Jellybean Benitez cues up his first record as DJ Bunny Ears and Laurie Anderson look on at the ARC Dance Party. 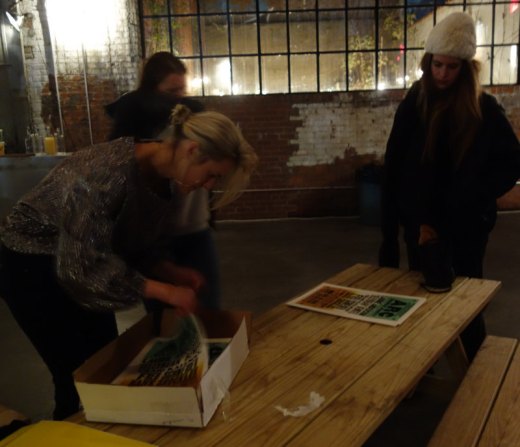 Ashley Gail Harris helped organize the party. Here she is sorting out the cool posters of the event at the ARC Dance Party!

The space is called 99 Scott. It is located at…99 Scott Avenue, an industrial area two blocks from Queens and two blocks from Bushwick. The room was huge and spacious–good thing, too, as there were a lot of folks in attendance, but even more so because of the giant speaker cabinet that emitted the sounds of the evening. The whole audio set up was excellent and donated by the nice people at Dub-Stuy Records.

Hank Shocklee’s name was immortalized when he produced albums by Public Enemy, the fabulous rap ensemble. He has also been kept busy working with a host of other rap and contemporary R&B acts. He has worked with Ziggy Marley, Mary J. Blige and Yoko Ono. Although the ARC Dance Party was advertised as featuring “vinyl-only sets,” Mr. Shocklee played his selections via some digital hook-up. Many of his tracks contained hip-hop style beats, but he also played some hot Eighties soul records, like “Just Be Good to Me” by The S.O.S. Band. Mr. Shocklee considers himself a “sonic architect,” and that’s just what he did–he built a heavy, heavy sound that got the folks dancing!

Hank Shocklee at the controls at the ARC Dance Party!

Fred Schneider is the driving force behind the ginchy new wave rock band The B-52’s. He knows groovy records, that’s for sure, and he had the dancers dancing the moment “Ain’t Nothin’ but a House Party” by The Show Stoppers was aired. Mr. Schneider’s set consisted of some cool Sixties soul and girl group records and it made folks happy. 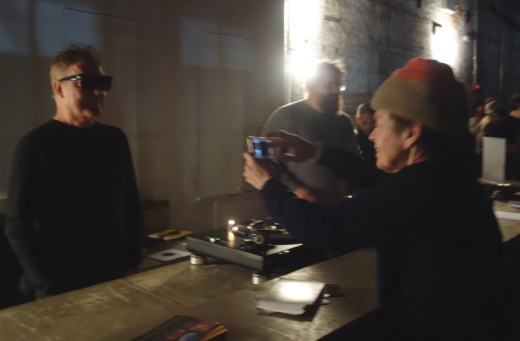 Fred Schneider does the standing still as Laurie Anderson snaps his photo at the ARC Dance Party!

Laurie Anderson is an artist first, and she approached her DJ set with that in mind. She started her set with a long, drum-beat and chant number of an ethnic nature–played from her laptop– before playing a couple soul records: Jean Knight’s “Mr. Big Stuff” and Aretha Franklin’s “Rock Steady.” Also in the mix was Devo’s version of “Satisfaction.” She ended with a Tom Waits track–not exactly super dance floor material, but all in attendance seemed to dig it.

Portions of the early part of the evening’s program were slightly marred by technical difficulties–mostly due to the last-minute preparations by presenters who wanted to use technology other than the turntables. However, once Jellybean Benitez started his first record, it was as if the whole room had been teleported to an underground downtown disco of the early Eighties. The Jellybean knows exactly what he is doing. His set started with Third World’s version of “Now That We Found Love,” went into “Soul Makossa” by Manu Dibango then The Talking Heads’ “Once in a Lifetime.” His transitions were smooth–you could hardly tell where one record stopped and another started. This, folks, is how DJing is done; don’t give the dancer’s a reason to leave the floor! Many people know of Mr. Benitez as a guy who produced some Madonna records. He’s done that, sure, plus he’s remixed about fifty or so hit records from artists ranging from Afrika Bambaataa to ZZ Top. He got his start as a club DJ, working such legendary New York City dance clubs as Electric Circus, Hurrah, Paradise Garage and Studio 54. Having not been to a club like that in many years, it is easy to forget what it’s like when a professional DJ is at the wheels of steel.

Craig Kallman hints at a record he is going to play on the back of his jacket at the ARC Dance Party!

Craig Kallman is another music industry big wig–currently he is the Chairman and CEO of Atlantic Records, so perhaps he is one of the biggest wigs there is. However, he is a devout record collector–owning hundreds of thousands of records. Also, he, too, got his start in the music biz as a club DJ, spinning his vinyl at The Tunnel, Danceteria, Area and The Palladium. At the ARC Dance Party, much like Jellybean, Mr. Kallman was a supreme DJ–very danceable records, smooth transitions, non-stop bop. His set consisted of what sounded like hot dance records from the Seventies and Eighties. Most of the tracks he played were unrecognized by the Boogaloo Bag writers, but it was a gas when he played the Funkadellic number.

By day, DJ Bunny Ears is a music supervisor for a top Madison Avenue advertising agency. At night he swings his reggae records at various clubs around New York City and around the world. A peek into his box proved that he had well over 150 Jamaican-pressed 45s ready to play in case he was needed–no dead air was going to happen at the ARC Dance Party. Although he never got a chance to play any of them, he was kept very busy assisting Fred Schneider and Laurie Anderson during their respective sets. Mr. Schneider likes to pick the sides and have an assistant cue and spin the actual records. Mr. Schneider then does the frug. However, the setup for this evening–mostly the way the DJ booth was constructed and situated–we saw little of Fred’s frug; but his music was heard and appreciated. Ms. Anderson, likewise, does not like to actually deal with the technical aspects of being a DJ. Thus, DJ Bunny Ears was enlisted as the technical assistant for these two and he did a magnificent job–especially considering he had to switch between turntables and a laptop several times during Ms. Anderson’s set. 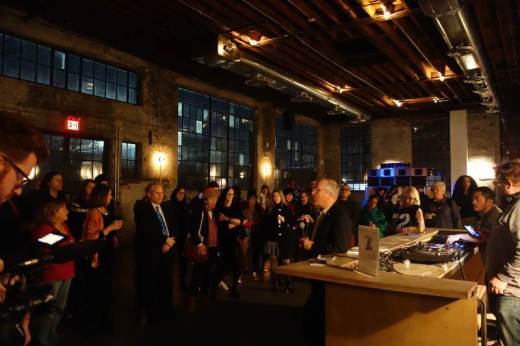 ARC founder and director B. George addresses the crowd at the ARC Dance Party!

In the middle of the event, B. George, the founder and Director of the ARChive of Contemporary Music, welcomed folks to the Dance Party and thanked them for their support. The ARC Dance Party was a huge success–happy feet danced, folks had great big smiles on their faces, money was raised. When it was over Hank Shocklee approached B. George and suggested he do this twice a month!  Well, that may not happen, but it seems as if there may be more ARC Dance Parties in 2019. 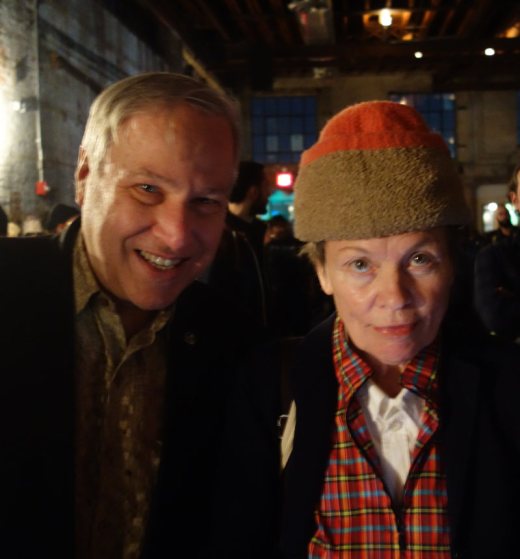 B. George and Laurie Anderson swing at the ARC Dance Party! 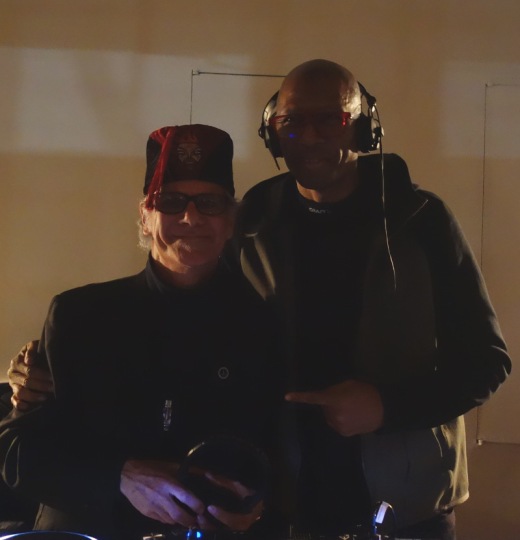 Phast Phreddie the Boogaloo Omnibus, whose day job is taking care of the records at the ARC, was enlisted to start the evening off with a few jump numbers as folks were rolling in. He rounded up some boss Go-Go jams, a couple of skas, funks and boogaloos and let them rip. Hank Schocklee a was a bit late, and took some time to set up, so The Boog got to play a few extra records than scheduled.. Here’s a list of everything he played: 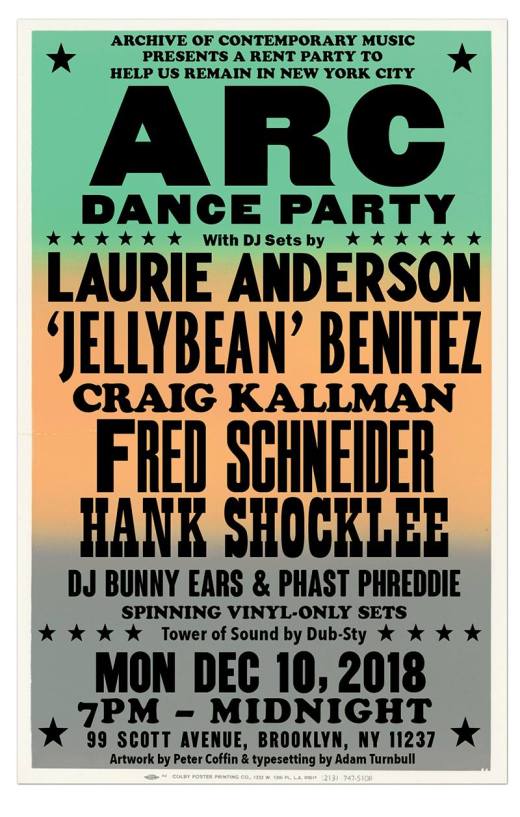