DJ Zerox and The Boog swing at the Copycat Cover Song Night Tribute to the Rolling Stones!

As every Boogaloo Bag reader should know by now, Copycat Cover Song Night is always a good time. Hosted by our pal DJ Xerox, who picks an artist and invites bands and DJs to come to Otto’s Shrunken Head and honor that artist one way or another. Each band will add several songs by that artist in its respective set. Sometimes a band will form in order to perform only songs by that artist. The guest DJ usually plays songs that pertain to the artist in one way or another—or at least cover songs of some sort.

On Wednesday June 10, the honored artist was The Rolling Stones. The bands were:

The Lady Janes—formed just to play a set of Stones songs. 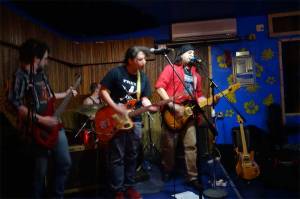 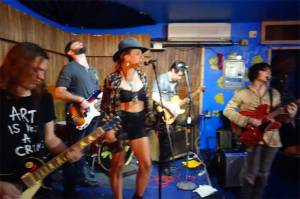 Phast Phreddie the Boogaloo Omnibus was guest DJ and he only played Rolling Stones songs as performed by everyone but The Rolling Stones! He took requests from the floor—name a Rolling Stones song (preferably one from the sixties)—and he was able to play a version of it; sometimes instrumental, sometimes in a funny language. Although The Boog usually plays only 7” 45 RPM records, he played a few cuts from LPs as some tracks only exist in that format. Also, a full dozen of the 60 records he played were from the Norton Records Rolling Stones cover song series. Norton Records continues to be one of modern music’s secret weapons. It regularly releases great reissue titles (the recent Soul Clap series of hits hand-picked by our pal Jonathan Toubin is essential), as well as new music by such fabulous current stars as Daddy Longlegs and Miriam. The Rolling Stones series is a genius concept where a different act presents its rendition of a Rolling Stones song on each side of a 7” single. The 12 songs played by The Boog at Copycat Night is just a taste of the 32 releases—66 songs in all, counting the four songs on the Their Hispanic Majesties Request two-disc set of songs sung in Spanish! This extensive Norton action was intended to salute Norton head honcho Billy Miller, who has been experiencing some health issues recently. Get well soon, my friend!

The fun did not stop there! One of the greatest songs in all Rock’n’Roll is “Satisfaction”—officially titled “(I Can’t Get No) Satisfaction.” The opening riff is one of the most identifiable pieces of music of the last fifty years. It may be no exaggeration to say that it has been recorded more than a hundred times. After the bands played, Phast Phreddie the Boogaloo Omnibus played 26 versions of the song in what can only be described as a Super Rock Mega Mix! When it was all over, everyone in Otto’s could easily state that they had received some sort of “Satisfaction!”

Here’s a list of all the songs presented by Phast Phreddie the Boogaloo Omnibus at the fourth annual Copycat Cover Song Night Tribute to The Rolling Stones: