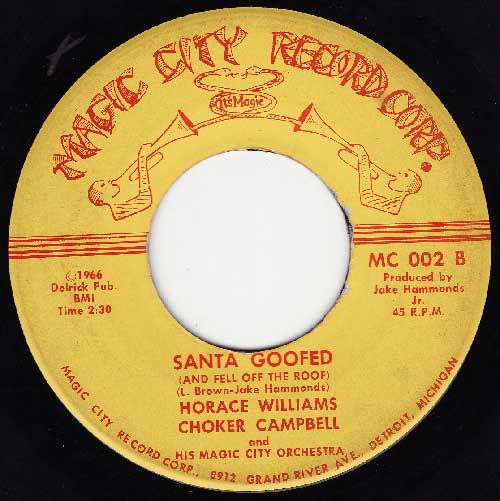 On Thursday December 19, the Artists and Fleas section of the Chelsea Market had a little Holiday Shopping Party, hosted by that groovy Frenchman Ol’ Stark, who has a booth there where he sells clothes and records. He is also in charge of the audio atmosphere of the room. On this particular early evening, Ol’ Stark rounded up a bunch of his DJ friends to do 30-minute sets for the happy shoppers—of which there were many. Among the DJs who participated were Girlsoul, Lupe Loop, DJ Shakey and Phast Phreddie the Boogaloo Omnibus. Our pal and fellow DJ Barney Iller also dropped by to dig the scene.

As The Boog was preparing to play his first 45 of the night, Ol’ Stark turned to him and said, “Don’t play any Christmas records! Everybody here is sick of them!!!”

AHHHHHH!!!!! That was ALL that The Boog brought!! He doesn’t play Christmas records very often—especially during winter—so he thought he’d play a little set of them, one time only. Well, since he brought them, he played them. Nobody complained. We have a feeling that the Christmas records that folks are sick of are not these Christmas records.  Here’s a list of them: