Caracas is the name of a city in Venezuela. It is also the name of a Venezuelan restaurant and bar located on the beach in the Rockaways, Queens. It is here that our pal DJ Ratta—un auténtico venezolano—holds forth every Sunday in the summer time. He calls his event Shake It Up Sundays at the Beach—and that’s exactly what happens from 2pm to 9pm. June 29 was his birthday, and Phast Phreddie the Boogaloo Omnibus was honored to be among the DJs he invited to help celebrate it. The other guest DJ was Debbie D from Georgia, who is the caretaker and den mother of the fabulous WFMU Rock ‘n’ Soul Ichiban interweb music stream.

Our pal Tony brings DJ Ratta a beer for his birthday at Shake It Up Sunday!

Ratta is one of our favorite DJs on the scene. He likes to mix mambo records in with ska and old R&B jams. How can you not like that? Debbie D also digs the old noise, and her selections were all perfect for the event. 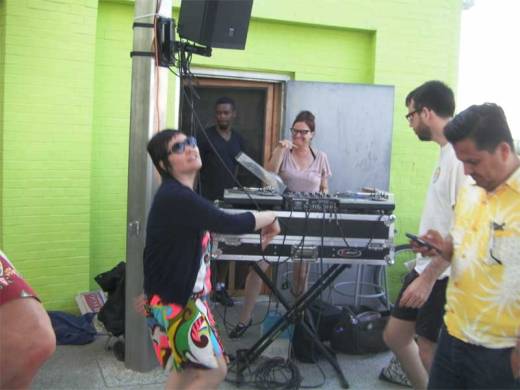 Shake It Up scene: Debbie D at the controls as Selector Bunny and Friar Popwell swing, and Tony.

It was a lovely day at the beach: the sky was blue, there was a cool breeze and the food at Caracas is amazing! The arepas, a Venezuelan delicacy, are deee-lishus! Plus, the coconut smoothie is highly recommended for those who do not partake in margaritas. Not only was June 29 Ratta’s birthday, but also it was the day of World Cup soccer games. At 4pm, the Shake It Up festivities were put on hold as a giant TV screen was dragged out and hooked up to the speaker system and the game, featuring Costa Rica and Greece, was watched. At the end of regular time, the game was tied at one goal apiece. It went into overtime and still no winner emerged. That left it up to a unique—some say bizarre—ritual known as “penalty kicks.” When the smoke had cleared, Costa Rica was the winner, and the country’s team advanced into another stage of competition. However, the game took nearly the whole early evening, leaving only a couple hours of Shake It Up time left, with mostly Debbie D and The Boog working the turntables. The night got crazy, with folks dancing and carrying on; and it included Debbie D ending one of her sets with Link Wray’s “Run Chicken Run,” only for The Boog to answer with his own chicken song, followed by a set of food songs! 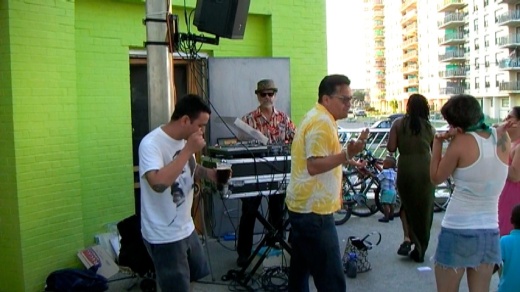 The Boog swings at Shake It Up Sundays! All photos by Nancy Gardner.

Just before the clock struck 9, Ratta took to the turntables, where he was wished happy birthday and he played a series of boss rocksteady records.

None of these records are for sale!