When Mr. Jonathan Toubin calls asking you to guest DJ at one of his parties, it is always best to take the gig. His event—usually coming under the banner of the New York Night Train—will always be the most stupendous thing going on that night, no matter what night, no matter what is going down around town. J.T.’s event is the place to be! Thus, when Phast Phreddie the Boogaloo Omnibus got the call to guest DJ with Mr. Toubin at the Boogie Night Blues Dance, he answered in the affirmative. When he found out that Daddy Long Legs and The Jon Spencer Blues Explosion were on the bill, he nearly flipped!

It all happened on Saturday January 10 at a joint way up in Greenpoint, Brooklyn called St. Vitus. Daddy Long Legs were there, not only to play a set of its raucus punk-inspired blues rock jams, but to record the whole thing for a live album. We noticed that the Boogaloo Bag writers in attendance were situated in a location adjacent to one of the room microphones to make certain that when they clapped their hands, their hands will be on the record! 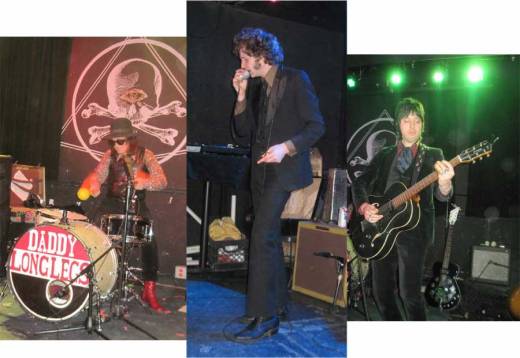 When Daddy Long Legs took the stage, about a quarter to ten, the place was packed and the joint exploded with the bossest, most blues-wailin’ trash ever heard. This band is great. The group’s two records, on the Norton Reords label, are highly recommended and essential listening for all Boogaloo Bag readers. Man, this is going to be one fine live album! As fabulous as the show was—and it was very fabulous, as all Daddy Long Legs shows are—nothing was more fabulous than the shoes of the trio’s guitarist, Murat Akturk.

The fabulous shoes of Murat Akturk!!!

Jonathan Toubin works his ass off at the Boogie Night Blues Dance!!

After the bands played, Mr. Toubin set up the DJ booth and played some heavy, heavy blues records as two lovely shadow dancers shook their own action on the stage, making the scene a total happening!

Phast Phreddie the Boogaloo Omnibus—no stranger to the blues himself—played two sets of super, non-stop, jumpin’ blues rhythms. He stretched the concept a bit by playing a couple garage covers of blues jams, but it was all rockin’. You know that everything is right with the world when a bunch of young people dance around to Howlin’ Wolf records. The night was stupendous, as is expected of an event staged by Mr. Jonathan Toubin!