Dick Dale, the King of the Surf Guitar, displays incendiary riffs at the Brooklyn Bowl.

Dick Dale can still play a mean guitar, that’s for sure. On Friday August 21 he did just that for about an hour of ear-splitting, echo-drenched jam at the Brooklyn Bowl in Williamsburg. Mr. Dale—known around the world as “The King of the Surf Guitar”—has been in ill health recently. The Brooklyn Bowl date was the last show of about sixty that he needed to do in order to pay his bills. At any rate, once Mr. Dale is on the stage with his trusty Fender strapped to him, it is as if all is right with the world as he wails away!

After the performance, our pal Josh Styles headed up a team of DJs who presented the official after-show party called Surf City. Mr. Styles, Avi Spivak (Human Being Lawnmower) and Phast Phreddie the Boogaloo Omnibus each took turns playing appropriate records: mostly guitar-driven instrumentals and songs about fun in the sun. Around one o’clock in the morning or so, a limbo dance contest was held and The Boog was happy to supply the soundtrack for that with a stack of calypso and jungle-beat 45s. As last year, the host of the limbo contest was cult horror film director Frank Henenlotter (Basket Case, Brain Damage). Once the winner was chosen, The Boog instantly switched gears to lead off the dance party portion of the evening by playing The Beach Boys’ bossest record, “Dance Dance Dance.” In the middle of his first set, The Boog spun a bowling record (complete with bowling sounds!), that got the Brooklyn Bowl staff very excited! 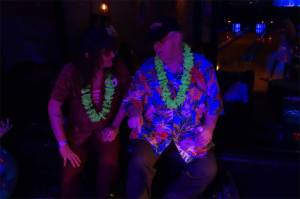 Josh Styles and Frank Henenlotter discuss the finer points of the film “Frankenhooker” at Surf City!

Josh Styles and Avi Spivak also took turns playing great records all night. Mr. Styles, of course, is known internationally as a fabulous DJ and the drummer of a great teen combo called Daddy Long Legs. Mr. Spivak is the founding editor of an amazing cartoon-vibed music fanzine called Human Being Lawnmower. They both have great taste in reet recordings and proved it with the selections they played. Not only are these two fine examples of humanity excellent DJs, but together they run a cool little shop in Downtown Bushwick called Rebel Rouser. It’s a must-stop for all Boogaloo Bag readers.

Also, let’s not forget the artistic and lovely gyrations of Go-Go dancer Bettina May, who worked wonders with the beach balls, as she shimmied to wild surf music.

Here’s a list of all the records played by Phast Phreddie the Boogaloo Omnibus at Surf City: