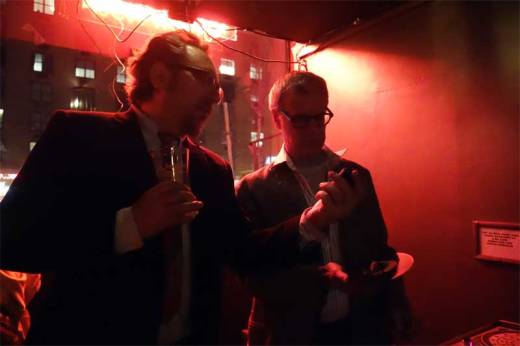 As this is being typed, the Boogaloo Bag writers are listening to a fabulous radio show: Downtown Soulville on radio station WFMU, hosted by our pal Mr. Fine Wine. For one hour (from 8 to 9pm NYC Time) every Friday Mr. Fine Wine plays some super fantabulous soul, funk and R&B records. Listeners wish the show was longer—maybe five hours longer!

Well, if you want to hear that many of Mr. Fine Wine’s soul, funk and R&B records, we suggest you make it to Club Botanica every Wednesday night from about 9:30 or 10:00 to who knows when. It’s a groovy little joint on Houston Street in New York City that is managed by folks smart enough to ask the best soul music DJ in the world to lay down some funky mid-week sonic atmosphere. So there he is: Mr. Fine Wine, playing his great records—and he has been doing it for 20 years! The Boogaloo Bag writers try to make the scene when they can, but alas, it is on a school night, so sometimes they just sit at home and listen to their own soul records. Somehow, it is just not the same; Mr. Fine Wine has way better records!

Anyway, 20 years is a LONG time for a DJ night to take place—especially a weekly one. Much congratulations are in order for Mr. Fine Wine for keeping the place jumpin’ with such fine records over all these years. This is truly a tuff task to ask of anyone, but if anyone is up to it, it is Mr. Fine Wine. On Wednesday, March 23, he celebrated this feat and quite a few of our friends were on hand to celebrate with him.

Botanica was full of beautiful people when Mr. Fine Wine celebrated 20 years at the club!

Several of Mr. Fine Wine’s DJ friends were asked to participate (each swingin’ with a 15-or-so-minute set) including Warren Lee (of the late, lamented Empire State Soul Club), Jonathan Toubin (New York Night Train) and Chairman Mao (Bumpshop), all of whom the Boogaloo Bag writers missed because they left early. However, they were able to witness the most excellent DJ skills of Drew Redmond (Finger Lickin’ Fridays), Greg Tormo (Solid Hit Soul Club), Sean Connors (Friends and Lovers Soul Night) and the lovely Connie T Empress (Empire State Soul Club). Also in the house, and they may have participated, was Mikey Post (Daptone) and Young Chris (Thee Knights of the Turntables); probably others as well, but in the dark confines of Botanica, the Boogaloo Bag writers couldn’t recognize them! As the Boogaloo Bag writers were leaving, One Mint Julep (aka Honky Tonk Radio Girl, aka Mrs. Fine Wine) was preparing her set. It was a shame to miss it, but, as mentioned, it was a school night. 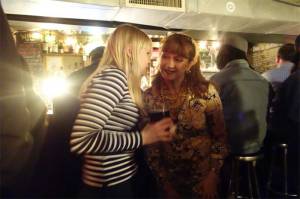 One Mint Julep and Connie T Empress discuss the finer points of Popcorn records at Botanica!

One of the DJs asked to participate was Phast Phreddie the Boogaloo Omnibus, who started the guest DJ action with a set of these instrumentals:

Once again: Hearty congratulations to Mr. Fine Wine for 20 years of playing soul records at Botanica!!! 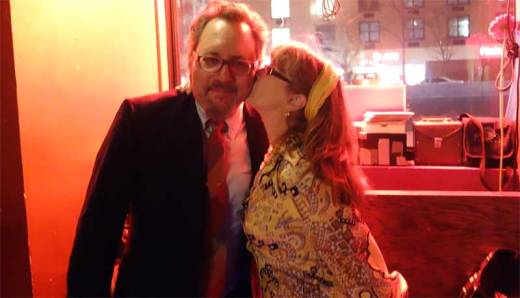 Connie T Empress congratulates Mr. Fine Wine for 20 years of service to the cause!