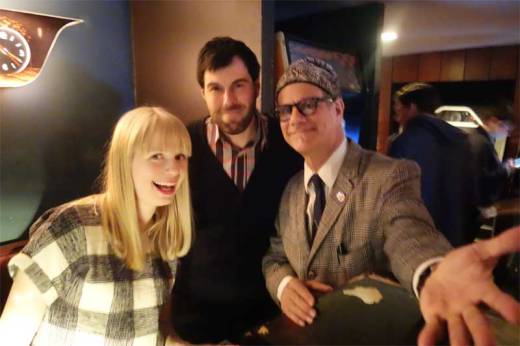 ¡FANTASTICA! is the latest creation from the genius laboratories of WANG DANG DOODLE Productions. It incorporates the juxtaposition of three distinct DJs, each with his or her own style, attitude and approach to selecting recordings for an evening’s dining, dancing and drinking pleasure. On Friday March 25, the first ever ¡FANTASTICA! took place when One Mint Julep, Nogood Nick and host Phast Phreddie the Boogloo Omnibus brought their respective collections of 45 RPM records to the Commodore and played them at an appropriate volume and in an appropriate order.

One Mint Julep first came to the attention of the BOOGALOO BAG writers back around 2012, when she made an appearance at a BIG TEN INCH party, back when it was still being held at the Bell House. She played some incredible hillbilly records that completely wowed the place. Since then, she has been one busy gal: She now has her own radio show on WFMU (Honky Tonk Radio Girl, Wednesday nights at 8pm); a DJ night with Mr. Fine Wine at the Robert Bar where they play popcorn records; and another night, also with Mr. Fine Wine, where they play great soul records at a joint called Friends and Lovers. PLUS! She is now married to Mr. Fine Wine and that must make her Mrs. Fine Wine! So you know she’s got great records and she knows how to play them. At ¡FANTASTICA! she played rockabilly, hillbilly, popcorn, soul, funk and, if memory serves, perhaps a doo wop record or two.

Nogood Nick is often found in the BOOGALOO BAG for the simple reasons that he is one of the most amiable DJs, has great records and he knows how to get the place swingin’ with said great records. What else is left to say about him, except his Rip! Rig! Panic! night at Otto’s Shrunken Head is the best happy hour event in town. The BOOGALOO BAG writers try to make that scene each month.

Everybody swings at ¡Fantastica!

After only two excellent sets, Mr. Fine Wine had to drag One Mint Julep out of the club—they had a plane to Detroit to catch at 0-dark-hundred the next morning. This was a bummer, but Nogood Nick brought extra records and he and Phast Phreddie the Boogaloo Omnibus continued the ¡FANTASTICA! through the night and into the wee hours of the morning. Nogood Nick played saucy soul music and tough organ grooves. The Phast Man swung with rock’n’roll, R&B, blues and the usual trash. Around 4:02 AM the great big bouncer came over and pulled the plug. But what a night! Folks were dancing and romancing the entire time. Man, if this ¡FANTASTICA! gig happens again, you really want to make that scene.