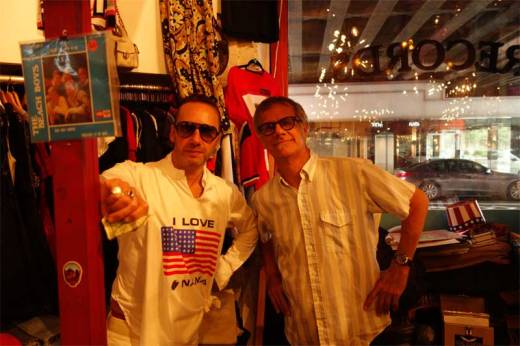 Ol’ Stark and Phast Phreddie the Boogaloo Omnibus swing at Artists and Fleas on the Fourth of July!

Fourth of July is always a fun time and on this Fourth there were two things made it even better: 1. Phast Phreddie the Boogaloo Omnibus was asked to DJ at the Artists and Fleas room at the Chelsea Market by Ol’ Stark, who sells records and groovy threads there. 2. Our old pal Marty Jourard was in town and dropped by to make the scene.

As the astute Boogaloo Bag reader knows, it was just a couple days prior to the Fourth that Ol’ Stark joined Phast Phreddie the Booogaloo Omnibus at the Bootleg Bar in Bushwick for the WHAM-O WATUSI. That spirit of camaraderie carried over to the early evening of the Fourth of July when the Phast Man showed up at Ol’ Stark’s booth with a box full of surf instrumentals. Ol’ Stark passed out wine (The Boog had a diet soda), bags of salty cheddar cheese-flavored snacks and Artists and Fleas tote bags to those in attendance, making it a very festive occasion. 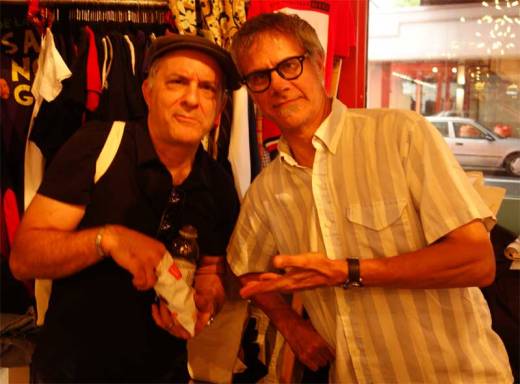 Marty Jourard and Phast Phreddie the Boogaloo Omnibus swing at Artists & Fleas on the Fourth of July!

Marty Jourard, as the perceptive trainspotter will tell you, is the keyboard/saxophone player for the cool L.A. new wave band The Motels. The Boogaloo Bag writers have known him since the late seventies, and indeed, he often played saxophone with Phast Phreddie & Thee Precisions. Marty also hosts a website that pays tribute to a saxophonist that both he and the Phast Man admire: Earl Bostic. Marty took part in the festivities, even going so far as to purchase a pair of sharp looking shoes from Ol’ Stark’s booth.

After The Boog played all 26 records he brought, he and his buddies hung out a bit, then he and Boogaloo Bag photographer Nancy “Jeannie” Gardner, Marty Jourard and his gal-pal Natalie walked not too deep into the West Village to an eatery called The Bus Stop, where dinner was served.

It was great catching up with Marty. He has been touring with The Motels recently. Also, he has just written a book about the music scene of his hometown Gainsville, Florida called Music Everywhere: The Rock and Roll Roots of a Southern Town. He was clearly excited about the good reviews and fine reception it has received. The Boog has just ordered a copy, and it comes highly recommended to Boogaloo Bag readers. After dinner, the group walked up to the High Line Park, back in Chelsea. Although it was on the wrong side of Manhattan to properly see the fireworks, some pyrotechnics were observed between the buildings as it gently sprinkled. 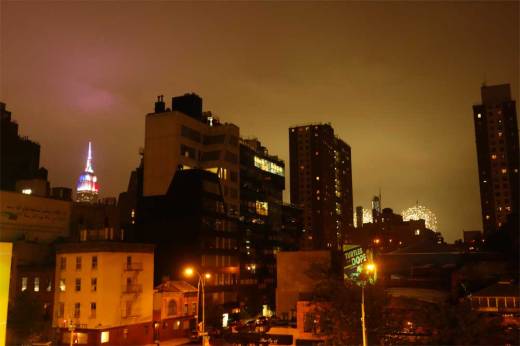 The Fourth of July, as seen from the High Line Park.

Here’s a list of all the records played by Phast Phreddie the Boogaloo Omnibus at Ol’ Stark’s Fourth of July shindig at the Artists and Fleas room in the Chelsea Market: