Copycat Night is a night of fun and excitement that is held twice a month at Otto’s Shrunken Head and hosted by our friend DJ Xerox. It involves Mr. Xerox picking an act to hail and asking some bands to come play and include several songs by said act in their sets; and by inviting some DJs to play records of artists interpreting other artists’ songs. (Phast Phreddie the Boogaloo Omnibus has been such a guest many times over the years.)  This activity apparently has been going on for a long enough time for it to celebrate ten years on Wednesday August 13.

Mr. Redmond was first on the scene, and the Boogaloo Bag writers were hoping to catch his set, but the slowest R Train in the world made sure that this would not happen. The Boogaloo Omnibus arrived just in time to start his set, then proceeded to let it rip, playing all New Wave records (ie, records made after 1975), many with involvement by close personal friends. As his allotted thirty minutes were coming to an end, he was asked to spin a little longer as the band had not yet arrived. This he was able to do for a while, but since he didn’t bring very many records–and the last one played was the B-side of an earlier spin–Drew Redmond was asked to return to the turntables. Mr. Redmond always packs plenty of records, and the Boogaloo Bag writers were delighted that they were able to dig him in action after all. He did not disappoint. He played his coveted original pressing of the MC5’s magnificent version of Them’s “I Can Only Give You Everything” on AMG. What a boss record!

Finally, the band appeared and played its 45 minute set, during which our friends Jonathan Toubin, Captain Heartlock and Matt Clarke also showed up and the Boogaloo Bag writers were so busy discussing things with them that not much of the Emma Craig show was experienced. Whaaahhh! But we did get this fine photo…

Emma Craig and her band swing at Otto’s Shrunken head!

After the bands set, Mr. Toubin wowed everybody with Iggy Pop’s “Lust for Life” as played by the contemporary bluegrass band The Bad Livers. His fabulous set also included an MC5 song–“Ramblin’ Rose,” a song first recorded by Jerry Lee Lewis on Sun records, but mostly known by the great soul singer Ted Taylor.

Unfortunately, the Boogaloo Bag writers couldn’t stay much longer than halfway, and through Mr. Toubin’s set they went home (via the F Train).

Here is a list of all the records played by Phast Phreddie the Boogaloo Omnibus at the Copycat Night 10 Year Cataversery:

DJ Xerox circulated buttons for the event! The top one is courtesy of Juke Joint Jonny. 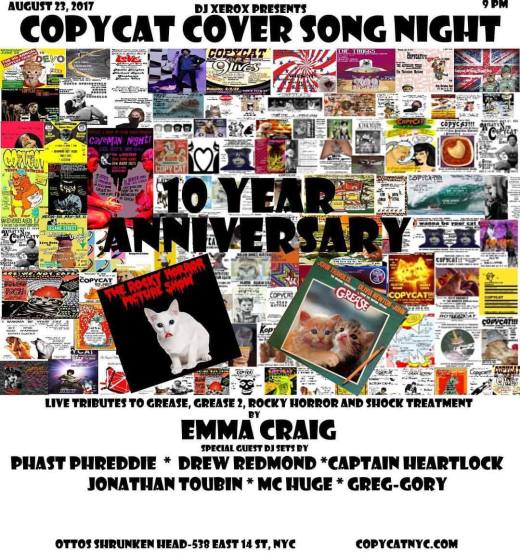