After the last WHAM-O WATUSI in December, Boogaloo Omnibus Productions received a memo from the Bootleg Bar management: DJ residencies will be terminated for the new year; each DJ will be called to serve as required.

With less than five days notice, Phast Phreddie the Boogaloo Omnibus was required for DJ service on Saturday February 2. A guest DJ would be needed, but who could swing on such short notice? Probably only someone who lives in the area. The first person anyone thinks of when thinking about Bushwick is Mr. Vacation, of course, but he was guest DJ in December. How about Brandon Peck AKA Handsome Vanzant. He’s off vacationing with his lovely wife on some remote Mexican island! Anyway, we’d like to give him more time because he always draws fabulous posters for the events. Then there’s Matt Clarke—The Elevator Operator. He lives nearby, has great records and is one cool cat. Lucky for us he was available and did a noteworthy job at the WHAM-O WATUSI. 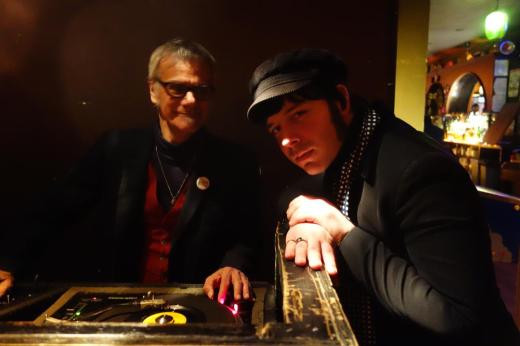 Mr. Clarke is one of the busiest men in town. He’s got a program on the WFMU Rock ‘n’ Soul Ichiban Stream called “What’s Happening” and often fills in for DJs on the regular radio station. Also he is a musician who has been in several of our favorite bands. Let’s see if we can name some: Quitty & the Don’ts, The Above, Miriam and Nobody’s Babies and his own group The Elevator Operators. Surely one or two has been left out.

At any rate, Matt Clarke is a cat with the goods. He’s heavy into Sixties British rock and pop records, so he certainly played a bunch of that. The Boogaloo Bag writers have never heard so many records on the British Decca label all in one night, that’s for sure! All good stuff. He also played some hot R&B and soul records.

Miss Nancy Gardner made some strawberry/chocolate cake cookies that went over quite well. The base of the cookie was of a pink strawberry flavor that folks all agreed tasted like Captain Crunch Berries and it was topped off with a dark chocolate kiss.

Of course, Miss Nancy also made her signature vegan brownies–now better than ever. A lot of our friends showed up to dig the music, the baked goods and each other. The night went really well and we’re hoping that the Powers That Be will give The Boog a little more time to prepare next time. Stay tuned. 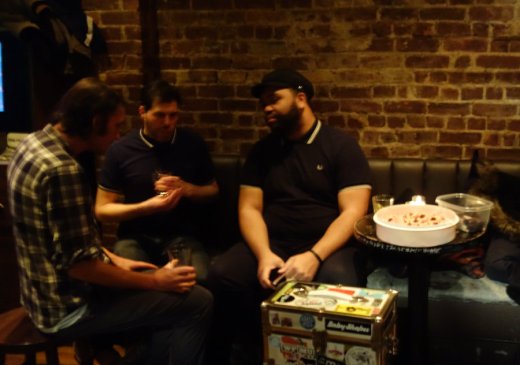 Here’s a list of all the records played by Phast Phreddie the Boogaloo Omnibus at the WHAM-O WATUSI–the 42nd one:

None of these records are for sale. Many of them have links to the youtubes for your edification.