On Saturday February 23, Phast Phreddie the Boogaloo Omnibus was the DJ at another happy hour event at the Jupiter Disco–East Williamsburg’s best-named night club. Due to the mysterious appearance of the Bat Signal, these early evening events are now referred to as Happy Hour in Gotham City. This is how Phast Phreddie constructs an audio environment that compliments the imbibing of frothy beverages: During the early part of the evening the scene is set with Mod jazz, organ grooves, reggae, provocative pop and mid-tempo soul records. The beat picks up as the evening moves along, until the final hour or so when heavy, heavy funk records are played, leading up to the ten o’clock disco DJ. On this evening, The Phast Man’s personal night did not end at ten, as he was also scheduled to DJ a later event.

Oh, and let’s not forget the most excellent Bat Cookies baked by Miss Nancy Gardner! Those were good! Although the evening started slowly, the Jupiter Disco attracted a nice crowd and folks were bopping along with the groovy music emanating from the club’s excellent sound system. Attendees got down on the sounds and chowed down on Miss Nancy’s cookies and vegan brownies. These nights are absolutely swingin’ and all Boogaloo Bag readers should dig it (next Happy Hour in Gotham City will be March 30th). 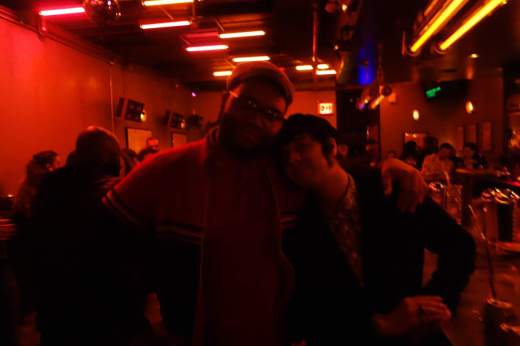 At ten o’clock, the next DJ arrived and set up her gear in a professional manner as The Boog set down. However, the evening was not yet over–two more places to go! 1) The Grab This! benefit at Milo’s Yard hosted by our friend Drew Redmond. 2) Quitty’s birthday at Easy Lover in Williamsburg with our friend Nogood Nick leading the charge. Both events were scheduled to run late, so there should be time–if there is energy!–to hit them both.

The Boogaloo Bag writers hit the benefit first because Phast Phreddie was scheduled to spin a few records and it was closer to The Jupe. Mr. Redmond lined up a full crew of DJs to swing, including Mikey Post, Grace of Spades, Classy Chris and Miss Hap. Luckily, there were plenty of Bat Cookies for this event also!

We walked in as Grace of Spades was playing some great reggae records–its what she does; Classy Chris followed with his specialty, mid-tempo soul records; Miss Hap also played reggae records (she totally gassed the Boogaloo Bag writers when she played “Rock Steady” by The Marvels, then turned it over and played “Be My Baby!”); and Mikey Post played some soul and funk records from the sixties and seventies (was that an ESG record?). Since the event was arranged to benefit groups that support women’s causes, Drew Redmond asked the DJs to play records made by women. It was so noted on the poster, but The Boog did not get that memo (or at least he didn’t read the poster!). Once he was informed of this theme, he looked through his records in order to dig out selections that would be appropriate–and found some! As for the benefit, money was made–mostly via a passed hat and a piece of the bar– and it went to Planned Parenthood and the pro-choice organization NARAL NY.

By the time the Boogaloo Bag writers, Miss Nancy and Phast Phreddie said their goodbyes at Milo’s Yard, it was late, late, late. It was raining. The M Train was just a few blocks away. It was just too easy to hop onto it and head home, instead of walking three times as far and waiting around for an L Train shuttle in order to make the scene at Quitty’s birthday party. Miss Quitty is one of our favorite people and we were saddened that we couldn’t be there to wish her well in person on this, her special night. So we hope she accepts our apology and best wishes as noted in this blog post.

Here’s a list of all the records played by Phast Phreddie the Boogaloo Omnibus at Happy Hour in Gotham City:

Here’s a list of the records played at the Grab This! benefit, including probably the only record played all night–the one by Della Reese–that mentions abortion:

None of the records listed here are for sale. Some of them have links to the youtubes clips. Please donate to women’s causes, including Planned Parenthood and NARAL. 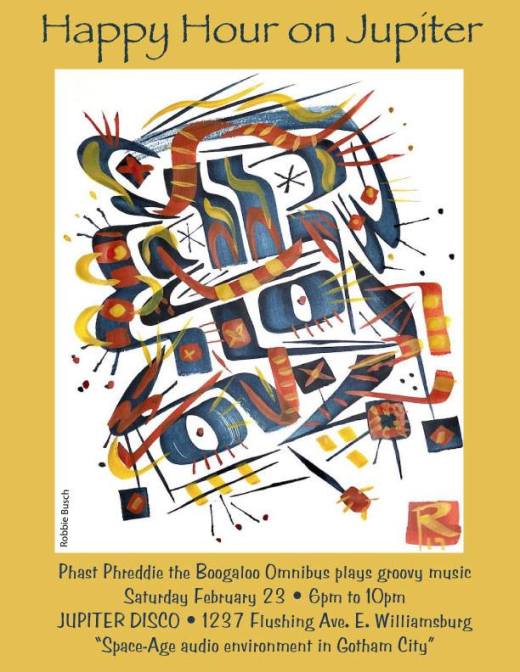