Mike Mortician and Phast Phreddie the Boogaloo Omnibus swing at the WHAM-O WATUSI!

What’s not to like about Mike Mortician? He is a groovy cat who sells sharp suits for a living. He is also the lead singer for The Memphis Morticians—a band that seems to play once every five years, but is one of the finest psychobilly bands you will ever hear. For a while, he was DJing regularly at Otto’s Shrunken Head for an event called The Midnight Monster Hop, but he doesn’t do that very often any more. Phast Phreddie the Boogaloo Omnibus has DJ’d with him before—most notably at a Mods Love Rockers event several years ago at the Bushwick Beauty Bar. That was a gas; Mike Mortician played some most excellently rockin’ sides that drove all the hep cats in attendance wild. 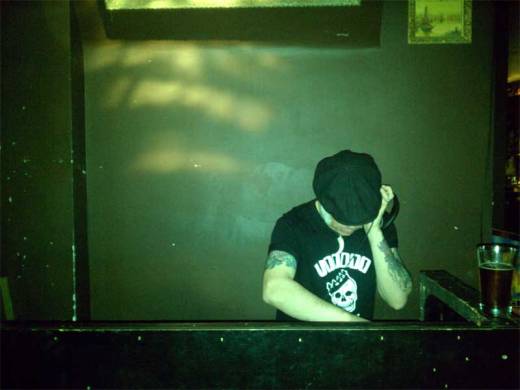 Mike Mortician mixes another monster musical gem in to his set at the WHAM-O WATUSI!

When Mike Mortician agreed to DJ at the WHAM-O WATUSI on November 5, we expected more of the same—and brother, did we get it. Mike played some boss jams that kept the folks at the Bootleg Bar boppin’ all night long. Since this was only a few days after Halloween, both Mike and host Phast Phreddie the Boogaloo Omnibus spiced up their DJ sets with monster records. Plus, because the clocks were adjusted back an hour in order to return to Standard Time at 3:00 AM that Sunday morning, The Bootleg Bar opted to stay open an extra hour and Mike and Phast obliged with an extra hour of rockin’ tunes!

Here’s a list of all the records played by Phast Phreddie the Boogaloo Omnibus a the November 5 WHAM-O WATUSI (don’t forget to check out the links to the youtubes in order to dig the actual tracks!):

The Boog and Mike in a pensive mood at WHAM-O WATUSI! 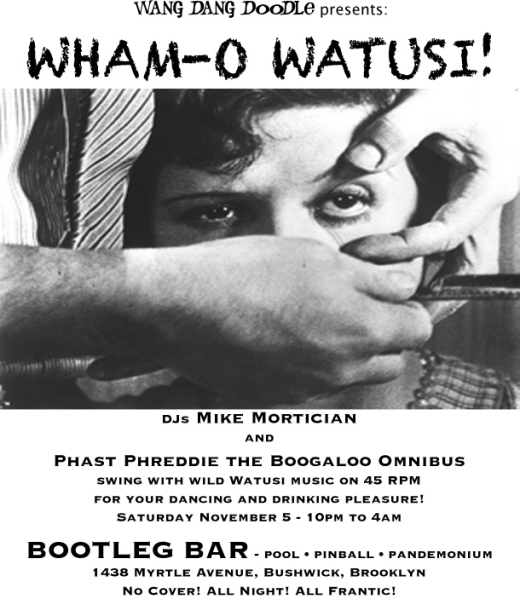