Phast Phreddie the Boogaloo Omnibus was asked to DJ another fabulous Rebel Night on Friday, July 20. Rebel Night, of course, is the boss rock ’n’ roll record hop hosted by crazy Japanese fellows with crazy rockabilly records, now held on the third Friday of the month at Diviera Drive in Williamsburg. However the evening did not start there…

Our longtime friend Paul Rutner was going to be in town for a separate event. Phast Phreddie first met Mr. Rutner when he came to Hollywood as drummer of the NY punk-ish band The Mumps in the late Seventies. He then moved there when he was drumming for The Swingin’ Madisons. Sometime in the late Eighties Mr. Rutner moved to Austin, Texas, so it is very rare when these two get to see each other. On this day, Mr. Rutner was in New York City in order to attend an event by one of his other many friends: Laura Davis-Chanin recently wrote a book called THE GIRL IN THE BACK: A Female Drummer’s Life with Bowie, Blondie and the ‘70s Rock Scene and was having a release party in a back room at the Bowery Electric. Apparently, Ms. Davis-Chanin was the drummer for a late Seventies new wave band called The Student Teachers, dated a member of Blondie, met David Bowie, and has stories to tell about it. Although it all sounds very interesting, The Phast One was not there for that, but to see his friend Paul Rutner. As it turned out, many other friends were in attendance, including Joe Katz, Antone DeSantis, Sal Maida, Karen McBurnie, Jon Hammer, Mike Rosenberg, Robert Vickers, Janie Heath, Ben Liemer, Andy Schwartz, Alex De Laszlo and the members of the hot teen combo Yo La Tengo. Other folks, too, but the Boogloo Bag memory banks are not so hot these days. The event was very worth attending, and the Boogaloo Bag writers are sure the book is well worth reading, as well.

When this event was over, Phast Phreddie the Boogaloo Omnibus popped onto the L-Train and was soon at Diviera Drive. Besides being a cool place to dig music, the venue is an excellent Italian restaurant. When he walked in, the Rebel Night hosts–Akinori Okada, Hiromu Yanagiya and Seiji Sato had just ordered some food, including some risotto for The Boog. The food is good there and it is highly advised that the Boogaloo Bag readers sample it at the earliest opportunity; and as often as possible after that (especially when our pal DJ Rata swings his Friday night happy hour gigs!)

Hiromu and Seiji are diggin’ the scene at Rebel Night!

Vibraphonic Vinnie is introduced to the dancing crowd by Seiji at Rebel Night!

The Rebel Nights always have two guest DJs. On this night, the second guest was Vibraphonic Vince. He and the exciting WFMU radio personality Todd-O-Phonic Todd grew up together somewhere in the wilds of New Jersey, collecting sound recordings of reet music and playing them real loud. The Vibraphonic One was also the drummer for the great Eighties teen combo The Raunch Hands. This is documented evidence that Mr. Vince is a hep cat daddy who keeps his wig loose and full of juice. Like, man, he is no hodad! When Vibraphonic Vinnie puts the needle down, BAM!! it stays down!! 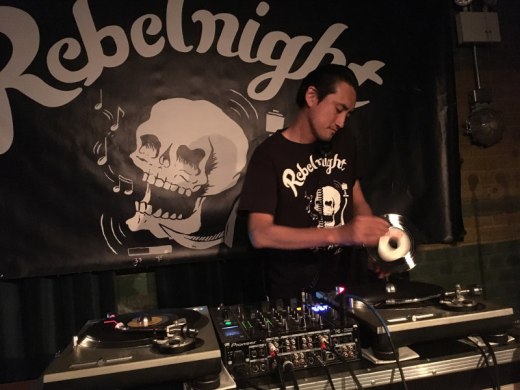 Akinori gets ready to cue another hot bopper at Rebel Night! 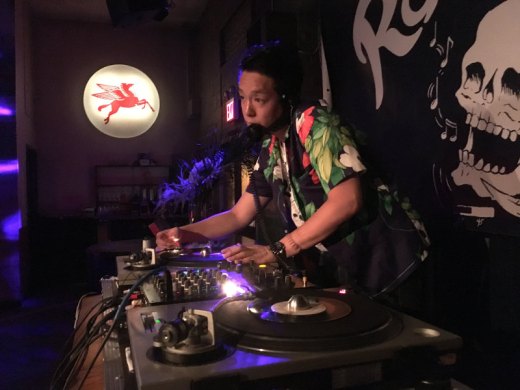 Junichi says, “Everything is すばらしい at Rebel Night!

Vibraphonic Vinnie swings with another hot rocker at Rebel Night!

Once the room was set up to jam, Seiji took to the turntables first and played some great stuff. then The Boog, Vinnie, Hiromu, The Boog, Vinnie, Hiromu and Aki ended the night with a little help from Junichi Matsuzaki, who showed up late. According to our notes, that’s how the evening went down. (The Boogaloo Bag notes have been wrong before, but who really cares?) At any rate, incredibly fantastic records were played by our Japanese hosts and by Vibraphonic Vince. The dance floor was jumping all night until the bitter end. Foxy chicks in hoop skirts did the stroll as guys in greased-back hair bopped around diggin’ the beat. This is such a gas, it’s a shame we all can’t just do this every single night of the week!!!

Phast Phreddie the Boogaloo Omnibus is always happy to swing at Rebel Night!

Here’s a list of all the records played by Phast Phreddie the Boogaloo Omnibus at the July 2018 edition of Rebel Night:

None of these records are for sale. Some of them have links to the youtubes for the listener’s edification.