Our friend Yana Lil-Jerk hosts a cool DJ night on the third Thursday of the month at Otto’s Shrunken Head. It is called Bangarang, named after the groovy rocksteady song by Lester Sterling & Stranger Cole. Miss Yana jams with the heavy irie Jamaican sound. Although Miss Yana has been known to feature other types of music (last year she was a guest DJ at the Subway Soul Club, also see Living for Kicks), reggae is her beat and rocksteady is her meat! However, the Bangarang can feature all sorts of rhythmic sounds, including Latin boogaloo and soul music.

Yana Lil-Jerk swings at the Bangarang!

For her April 18 event she asked Phast Phreddie the Boogaloo Omnibus to come hang with a bunch of his rhythmic sounds. The Phast Man doesn’t get many opportunities to play his reggae records, so he packed a bunch of them–plus a few boogaloos and funky soul rekkids–and dragged them out to Otto’s, which sits at the top of the East Village on 14th Street.

A special added attraction to this evening was the presence of the great western swingabilly group Susquehanna Industrial Tool and Die Company. SIT & Die, as its many fans like to call the band, is known for its unique take on boogies, ballads and blues. The trio played in the back room, while the Bangarang took place in the front, submitting those in attendance to a sort of cultural whiplash. The SIT & Dies have a residency at Otto’s on the fourth Thursday of the month. But for some reason, the April gig was moved to the third Thursday. Good thing, because this is one of The Boogaloo Omnibus’ favorite bands and he rarely gets a chance to go see it any more. On this night, he was able to witness several sets, plus play some totally unrelated records in the front room. Also on this night, the jumpin’ little trio was aided and abetted by the thrush Stella Rose Saint Clair, whose lovely voice treated all to wonderful renditions of popular ballads. 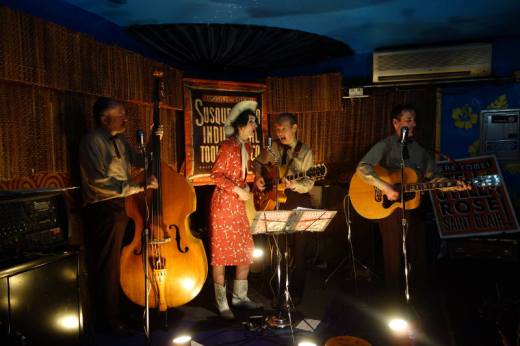 Meanwhile, the front room was popping with the rocksteady, reggae and assorted mambo jive of Miss Yana and Phast Phreddie. It was a very groovy night, appreciated by the many open-minded folks who frequent Otto’s.

Here’s one of the boss records played by Yana Lil-Jerk at the Bangarang!

Here’s a list of all the records played by Phast Phreddie the Boogaloo Omnibus at the Bangarang.

None of these records are for sale. Some of the titles above have links to the youtubes for you to dig. 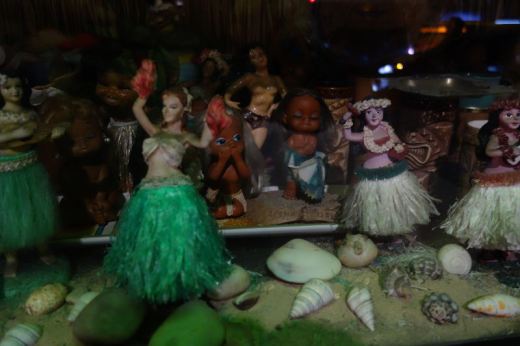