DJ Shakey and Phast Phreddie the Boogaloo Omnibus swing at the WHAM-O WATUSI!

April 6 was a heavy, heavy date on the calendar of Phast Phreddie the Boogaloo Omnibus. It was going to be one of those great days of record-buying in the daytime and record-playing in the night time. The Allentown Record Show was that morning. Only 78s and 45s are allowed to be sold. If you have been an avid reader of the Boogaloo Bag, you will know that this is The Boog’s scene. He considers it a High Holy Day and has missed very few of them since moving to the East Coast more than 25 years ago. It takes place twice a year and the Phast Man always finds good records. That evening, a WHAM-O WATUSI was scheduled at the Bootleg Bar of Bushwick. So that meant that Phast Phreddie was planning to get up about 5:00 AM, get a Zipcar, pick up his digging partner Miss Yana Lil’Jerk, drive out to Allentown, PA for the 8:00AM early entry, buy a few records, drive all the way back to Brooklyn, then make the scene at the Bootleg Bar by 10PM and play a few records until 4:00AM. A full 24 hour day if ever there was one.

However, the Zipcar stars were not aligned. When the Phast Man arrived at his car’s location, it was not there. The 24-hour lot attendant couldn’t find it. Phast called the Zipcars. The lady on the line said she could make the car honk. No honking was heard. The car was not there. The Zipcar lady assigned him another car…but it was about a 20 minute walk away. A car service was called. It would have someone pick up Phast Phreddie in seven minutes. It took 20! When he got to the Zipcar, its side mirror on the left side was broken off! Phast called the Zipcars. OK, here’s another car, across town. Phast walked up to Flatbush Avenue to try and hail a cab.

Luckily, a bus came and took him close to the lot with the third Zipcar. However, this was an enclosed lot with no attendant–totally automated. The car needed a card of some sort in order to get the car out of the lot. The card was not in the car. Therefore the car could not be removed from the lot. The Zipcars were called. The order for a car was cancelled. The Zipcar lady was very apologetic, but apologies do not buy groovy old records. The Phast Man was pissed off!! He called Miss Yana and told her the deal. Major bummer.

It just so happened that that Saturday was also the official opening day for Phast Phreddie’s weekend pick-up softball league. So he played ball instead of shopped for records. Another bummer, because he lost the game he pitched.

However, there was one bright side. Our friend DJ Mc Boing Boing and his friend Josh Rattner were having a grand opening of their new record store called Head Sounds. After the ballgame, Phast Phreddie headed over there; his day of buying records must happen, after all. The store, located at 88 S. Portland Avenue in Fort Green, Brooklyn, is a small one, adjacent to a hair-cutting joint and conveniently located just steps away from the Fulton Avenue stop on the G Train. The storefront is very small, so if you sneeze as you walk past you will miss it. However, the store has a most excellent selection of LPs–plenty that The Boog would happily purchase had he been in the market for groovy record albums. The store had only a handful of boxes of 45s–but there were some good ones, that’s for sure, since about a dozen of them were purchased. Thus the day wasn’t a total loss. 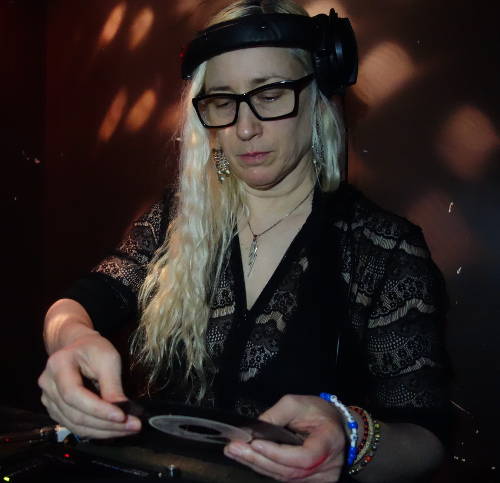 The night was definitely not a total loss–in fact, quite the opposite. Guest DJ at this WHAM-O WATUSI was DJ Shakey. DJ Shakey is a swingin’ kitten on a mean and clean scene. She is a professional DJ; that is, she makes her living do this stuff, often traveling great distances in order to do so. Plus, she occasionally hosts the Shakey’s Record Fair and the Thrift On! clothing swap. If that’s not enough, she also is a co-organizer of the Warper Party–a series of monthly electronic music and art happenings that takes place at various venues throughout the city.

Although DJ Shakey mostly makes with electronic dance music, she can be an eclectic record selector and at the WHAM-O WATUSI she played a lot of Sixties records–soul, funk, garage…the kind of trash that the WHAM-O enthusiasts dig. She has been pals with Phast Phreddie for about 20 years or so, but they rarely get this chance to work together, so he was very happy when she agreed to do the WHAM. For his part, the Phast Man played all sorts of jams, including many of the record he had purchased that afternoon from Head Sounds.

If you mention that you heard about Head Sounds in the Boogaloo Bag, perhaps DJ McBoing Boing–a serious artist–will illustrate the record sleeve of your favorite purchase at Head Sounds, as he did for Phast Phreddie.

Meanwhile, Miss Nancy Gardner baked some excellent chocolate Easter cookies to go along with her signature vegan brownies. She keeps outdoing herself with every new baking adventure. Who knows what she’ll come up with next?

Here is a list of all the records played by Phast Phreddie the Boogaloo Omnibus at the WHAM-O WATUSI:

None of these records are for sale. Some of them may have links to the youtubes for your edification. 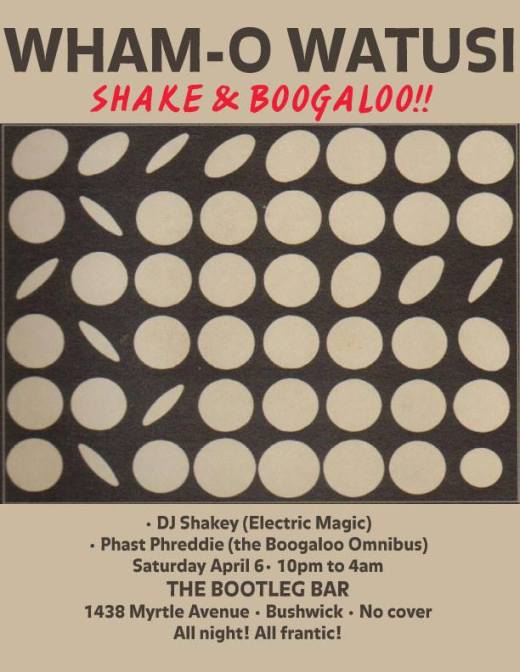