On Saturday March 30, Phast Phreddie the Boogaloo Omnibus hosted another happy hour event at the Jupiter Disco. But this was not just another Happy Hour in Gotham City. This one featured Alberto de Wows!ville, our Spanish friend who now lives in Berlin. He was in town for about ten days so we let him horn in on our DJ action at the Jupe. Thus, instead of the usual happy hour jazz The Boog plays at these events, a program of outrageous rockin’ jams was in order to create Jumpin’ on Jupiter.

The Boogaloo Bag writers first met Señor Alberto when he lived in New York City about ten or so years ago. He ran a groovy record store called Wows!ville on Second Avenue in Manhattan. The store stocked all the boss teen pop discs, including all the Norton Records releases and odd Bo Diddley albums. There was a giant Rat Fink in the corner. Also, Señor Alberto and his pal Señor Dos Platos hosted a wild DJ night in the basement of Niagara in the East Village every week. That was a wild scene. However, all good things come to an end. Señor Alberto had to close his store and move back to Europe. Eventually, he settled in Berlin where he founded a whole new Wows!ville scene that includes a record store, a night club and a pizza shop! The cat is moguling! 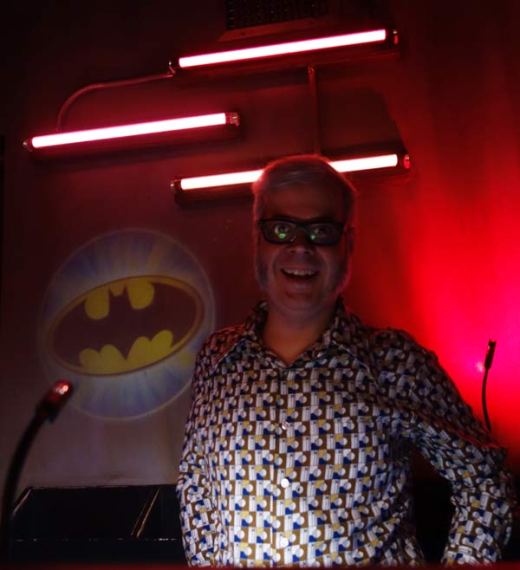 Alberto de Wowsville responds to the Bat Signal at the Jupiter Disco!

So Señor Alberto was coming back to town, looking for DJ nights. The Boog was happy to let him swing at the Jupe. Several years ago, Alberto set The Boog up with a couple cool DJ gigs in Berlin; this was payback. Everyone was excited about this night.

Then The Boog got a message the day Señor Alberto was to leave Germany: “I am at the airport and just figured out that I left my record box at home!!”

¡No problemo! Phast Phreddie the Boogaloo Omnibus packed an especially bitchen box of old 45s and let Señor Alberto dig in and spin whatever he wanted. Everything worked out fine. Along with Señor Alberto was his gal pal Miss Kaja–a woman of the world if ever there was one. She is from Sweden, but has lived in Thailand and California, and now Berlin.

Plus, Miss Nancy made some fabulous maple and chocolate fudge with little Bat emblems attached to them (after all, we were at The Jupe and the Bat Signal was in full force) as well as her signature vegan brownies. So the evening was saved. Folks came from far and wide and to dig Señor Alberto’s scene. 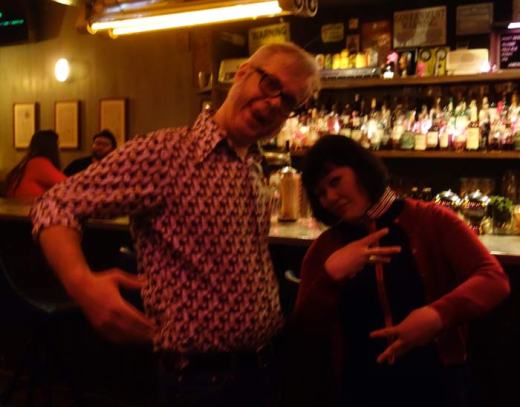 As this portion of the evening winds down around 9:30pm or so, The Boog usually digs out some hot funk jams in order to make a fairly smooth transition between the groovy Gotham City scene and the late night disco DJ at the Jupe. However, the follow-up DJs showed up late–well after the B.T. Express record was played, which is nearly six minutes long, allowing time for the other DJ to set up and The Boog to set down. The Boog ran out of the funky stuff and had to make due with a few soul & R&B records until he was relieved.

The night was still early, so Miss Nancy and The Boog headed over to the Gran Torino (aka Diviera Drive) for a mambo night hosted by our friends DJ Rata and Tony Salvaje. A band called Lapachamambo played and we dug that quite a bit. The Boogaloo Bag writers urge its readers to dig it when it comes to your town. 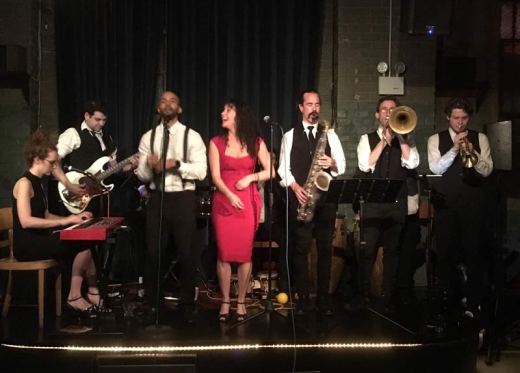 Here’s a list of ALL the records played at Jumpin on Jupiter, including the ones played by Señor Alberto (marked with an asterisk*):

None of these records are for sale. Some of them have links to the youtubes for you to dig. 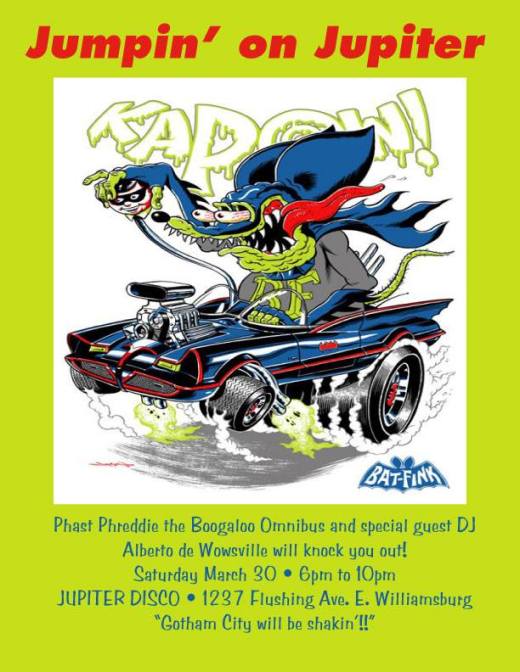